The UESPWiki – Your source for The Elder Scrolls since 1995
< Morrowind: People: Daedric Prince
Jump to: navigation, search 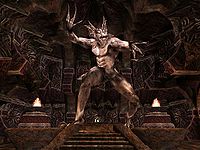 Molag Bal is the Daedric Prince of Domination. He is involved in several quests and can be interacted with through his statues in Bal Ur and Yansirramus.

"So, you do not enjoy the blood hunger, little leech? Do you miss the warmth of the sun? I can obtain the cure for you, but you will help me first. You will find my daughter, Molag Grunda, in the dungeon Dubdilla below Mt. Assarnibibi [sic]. There she hides with her consort, the lowly atronach Nomeg Gwai. She believes hiding in a sorcerer's cave will shield her from my eyes. Foolish girl!"

"I ordered her not to associate with these animals. I told her what the penalty would be for her disobediance! Yet she continues to defy me! Willful beast! I cannot have this. Find her, mortal. Kill her and the atronach, so I may deal with them in the Outer Realms. When this is done, return to me, and I will rid you of your unlife. Take care, mortal, for she is powerful. She is still a daughter of Molag Bal."

"I see you have done as I asked, little vampire. It was not easy for me to obtain the cure, but I was able to pry it from Vaermina after some...discussion. You have earned it. Now I have eternity to punish my daughter for her defiance. Your curse is lifted. Yet...I wonder, will you miss the taste of blood on your lips? When you sleep, will you taste the salt and copper flowing over your tongue? Go, mortal. Bask in your precious sunlight."

When you activate Molag Bal's shrine in Yansirramus:

"Why do you summon me now? I have no time for your pleadings, weakling. I have other matters that need my attention. Menta Na!!! He will pay for his insolence. Listen well--those in my service will do my bidding, or they will suffer eternal torment. You will serve me, mortal."

"Menta Na has grown careless and lazy. He sits in his wretched cave while life on the surface goes on unmolested. He was spawned a creature of terror! His role is to sow fear and discord among men and mer, yet he is content to stay locked in his cave and mock my will!"

"Kill him, mortal. Set his soul flying to the Outer Realms so that I might show him eternal torture for his disobedience. Take this key. You will find him in in the caves of Kora-Dur, east of Kogoruhn. Kill this lazy fool for me, mortal. Do this, and you will have my favor."

"Ah, you have freed the soul of Menta Na! Torment will be his. Endless agony is all he will know until the end of time. You have performed well, mortal. Perhaps you will be my servant again one day. Take this and use it well. Bring strife and discord with you wherever you may travel. Now go"

This Morrowind-related article is a stub. You can help by expanding it.
Retrieved from "https://en.uesp.net/w/index.php?title=Morrowind:Molag_Bal&oldid=2353916"
Category:
Hidden categories: