The UESPWiki – Your source for The Elder Scrolls since 1995
< Morrowind: Quests: Daedric Quests / Ashlands
Jump to: navigation, search

Molag Bal's shrine can be found in the ruins of Yansirramus, two islands west of Tel Aruhn. Note that you may be able to access the shrine safely, but exploring any of the side chambers will likely get you attacked. 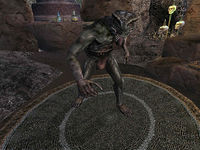 Menta Na needs to be banished from Tamriel.

Molag Bal complains about one of his servants, a lazy Daedroth named Menta Na who has retreated into the caves of Kora-Dur instead of creating the usual havoc and terror. Molag Bal gives you a key and asks you to kill Menta Na to obtain his favor and a reward.

Kora-Dur can be found east of the stronghold of Kogoruhn, far north of the Red Mountain Crater. It is located high up on a hillside, and is rather easy to miss. The door is heavily locked but fortunately you have a key.

You'll find Menta Na in the innermost chamber. Among the loot you'll find here is a Daedric Staff. Return to the shrine to receive your reward, the Mace of Molag Bal.

This bug is fixed by the Morrowind Patch Project. As of patch level 1.6.4, Daedra Skin can be dropped by clannfears, daedroths, hungers, ogrims, and ogrim titans.