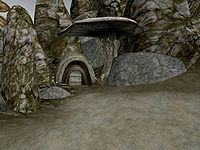 Dralas Ancestral Tomb is a large tomb between Dagon Fel and Rotheran on the island of Sheogorad. To find this tomb, start from Rotheran heading west until you reach the coast. Follow the coastline north until it starts to veer west, head east instead, where you will find the tomb a little inland, guarded by a Skeleton.

After entering the tomb, you will immediately notice a staircase which leads to the main chamber. In the main chamber there is a leveled undead, the corpse of Nelix Fly-Breath, a variety of loot on the various platforms throughout the main chamber including a chitin war axe, Nordic fur bracers, and The Ruins of Kemel-Ze, and various crates and urns full of clutter and bonemeal respectively. To one side of the chamber is smaller chamber containing a leveled undead, a trapped chest containing minor loot, a few more containers, and a door. The door leads to a room with a bonelord, a coda flower, and a chest containing minor loot. The other side of the main chamber leads to a hallway containing two leveled undead, the Long Blade skill book Words and Philosophy, repair prongs, a large amount urns, and a locked door. Inside the door is the corpse of Yanniss (who has two keys on him (one of which only opens the 5pt lock you had to open to get to him), and a pair of heavy leather boots), an Imperial broadsword, and a few containers full of clutter.

There are three known members of the Dralas family: 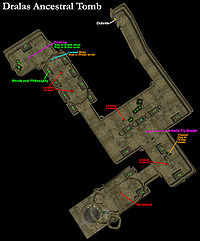