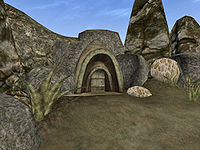 Baram Ancestral Tomb is a large tomb on an island north of Tel Aruhn in the Azura's Coast region.

The enemies here include two Daedra and four undead. The corpse of a "recently slain knight", who has a key to the Gimothran Ancestral Tomb, can also be found here. There is a potion and a scroll, a few pieces of equipment, the Axe skill book 36 Lessons of Vivec, Sermon 16, quite a few ingredients (including a portion of fire salts, dreugh wax and daedra skin), a journeyman's pick, a key to a locked door.

There is only one known member of the Baram family: