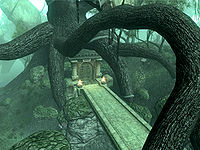 Xedilian at the end of the Third Era

Xedilian is a ruined facility in the Shivering Isles at the end of the Third Era. The facility once served as a way to keep unwanted visitors out of the Isles. The facility was powered by the Resonator of Judgment, a converted obelisk of Order, which enticed adventurers to enter. Once there, they were either killed or driven mad,[1][2] the former being favored by the denizens of Dementia and the latter by the residents of Mania.[1][2][3] Those who were driven mad were given a permanent place in the Isles.[2] The ruins were made up of three main sections: the Chamber of Conversion, the Chamber of Avarice, and the Chamber of Anathema. The caretaker of the dungeon is Kiliban Nyrandil.

After the construction of the Gatekeeper of the Fringe, the facility fell into disuse. Only a few years later, a tribe of grummites moved in. When the Gatekeeper was slain in 3E 433, Xedilian was put back into operation by Sheogorath's Champion. It served to thwart the many Tamrielic adventurers entering the realm from the newly-opened portal in Niben Bay, but was not enough to combat the forces of Order during the final Greymarch.[1] It is unknown if Xedilian continued to be used after the creation of a new Gatekeeper. 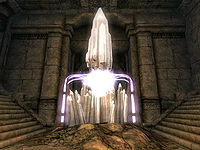 The Resonator of Judgment

The third and final chamber, Anathema, has the remaining adventurers facing a room full of corpses, the walls and floors strewn with blood. The Demented option here is to raise the corpses and have them attack the adventurers. The Manic option is to have the adventurers believe they have died, create the illusion of their souls rising from their bodies, and then returning them to reality.