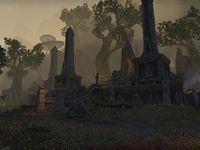 The Shrine of Saint Veloth circa 2E 582

The Shrine of Saint Veloth is an ancient temple dedicated to the Saint, Veloth the Pilgrim, found in the region of Deshaan, in the province of Morrowind. The Shrine is considered holy grounds, as it contains the skulls and bones of Veloth himself, in the Reliquary of Saint Veloth.[1] The ruins are made of giant Obsidian arches, located on a mound found along the riverbank in eastern Deshaan, in the region of Siltreen. The location also contains a shrine to Boethiah, where Urili Vox would often pray, before her plot against the Tribunal.[2] In 2E 582, Magistrix Vox's plot against the Tribunal would commence, and so after stealing Veloth's Judgment from the Mournhold Temple, Vox's Maulborn took swift control over Siltreen, raiding the Shrine of Saint Veloth and scattering Veloth's remains. The Saint's remains were returned to the priesthood at the Shrine.[3]