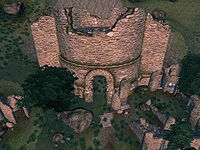 Fort Chalman (also known as Chalman Keep) is a ruined military fort located on the Red Ring Road, northeast of the Imperial City.

During the Three Banners War of 2E 582, Chalman was an expansive and strategically important keep. It had its own farm, mine and lumbermill, and was heavily fortified. It was initially located within the territory held by the Ebonheart Pact, and its central location made it essential for control of the Imperial City.[1] A notable three-way battle known as the Battle of Chalman Keep[2] occurred here between Pact, Dominion and Covenant forces, when the fort was taken from the Covenant by a Dominion invasion force, after which the Dominion crowned a figurehead Emperor from among their warriors.[3] The keep changed hands many times over the course of the war.[1]

The fort was abandoned by the Imperial Legion during the relatively peaceful Third Era.[4] By the time of the Oblivion Crisis in 3E 433, Chalman was no more than a ruin infested with undead.[5]