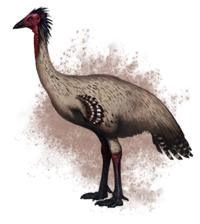 Fellrunners are flightless birds found primarily in desert regions such as Hew's Bane and Northern Elsweyr. They can also be found in the Summerset Isles.[1] Fellrunners are harmless, and as their name implies, will run at the sight of anything suspicious; this reflex is often used against them by hunters, due to the fact they will run too fast and trip, breaking their thin bones.[2] They are incapable of flying and swimming due to their tiny wings.[2]

Fellrunner meat is described as being good for making jerky, but is tricky to cook without becoming dry. It is also described as being more like steak than poultry, and that it's "dark red and marbled with thin, delectable streaks of fat".[3] One Altmer researcher had discovered that if fellrunners were imbued with wisp essence that it would cook the bird perfectly from within.[4]

Their feathers were also known to be used as quills[5] and were used on wooden dangle sticks.[6] Teal-Faced Fellrunners became popular as pets during the Interregnum in High Rock and Hammerfell after a flock was sold to King Fahara'jad's menagerie in Sentinel.[7]