Originally published October 11, 2017. The original article can be found here.

Not all of Sotha Sil's experiments go as planned. Face the Clockwork God's most dangerous creations in the Asylum Sanctorium, the Clockwork City DLC game pack's new Trial, coming soon for ESO Plus members and to the Crown Store.

Sotha Sil's realm is filled with mechanical wonders unlike anything found in Tamriel, but this includes both his incredible successes and his discarded, often-dangerous failures.

"The Asylum Sanctorium is an isolated section of Clockwork City created by Sotha Sil to sequester three Saints (Saint Felms, Saint Llothis, and Saint Olms) after it became clear that his experiments made them unstable," says the Trial's Lead Writer, Randy Begel. "Over time, the asylum evolved into a place where residents of Clockwork City would come to make offerings and pay homage to the Saints, or seek the assistance of the alienists for their own psychological troubles." 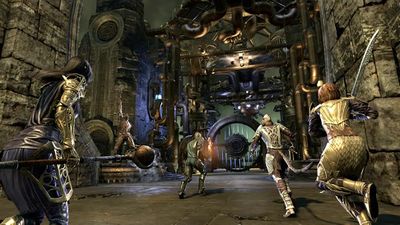 The Saints were once counted amongst the Tribunals most-trusted companions, but they now reside inside monstrous clockwork bodies, hidden from the rest of the city.

"The three Saints are some of the most revered figures of the Tribunal Temple, aside from the living gods themselves, and their closest mortal companions," explains Begel. "These mechanical constructs (powered by Black Soul Gems containing their immortal souls) were crafted by Sil himself to be vessels for these revered figures."

It was this mechanical transformation that sent the Saints mad, forcing the Clockwork God to house them within the asylum for the protection of all. However, all three Saints have become increasingly agitated over time, and the asylum's caretaker worries that they might escape.

"The players come across the Asylum Sanctorium in a moment of crisis. The head alienist fears that he can no longer keep the Saints' insanity in check, and he does not have the power to contain them should they finally turn violent."

It's up to you and your team to enter the Asylum and subdue them before they threaten all of the Clockwork City.

A New Type of Trial[edit]

The Asylum Sanctorium is a new type of Trial for both veteran and rookie groups. Like previous Trials in The Elder Scrolls Online, this new challenge requires 12-players and a high level of coordination and communication in order to complete. However, this new challenge also has two big differences: It only has three bosses total and allows you to pick how you want to take them on.

"The Asylum Sanctorium is very much a choose-your-own-adventure style of Trial," says the ESO's Dungeon Lead, Mike Finnigan. "The only boss you actually have to kill is Saint Olms, but you get to decide how difficult you want to make that fight."

There are two other bosses in the Asylum Sanctorium (Saint Felms and Saint Llothis) and either one can be fought individually in any order. However, if you so wish, you can skip one or both of them and go straight for the clockwork monster known as Saint Olms. But be warned, if you skip one or both of the first two Saints, you'll have to deal with them and Olms at the same time, making the last fight considerably harder. 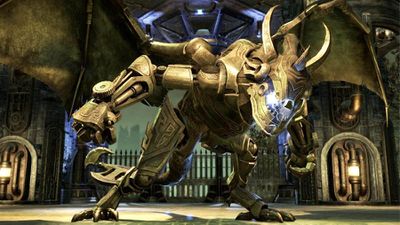 "Some of the Trials feedback we hear from players is that they want even more that truly pushes them to their limits, so the Asylum Sanctorium was a way for us to develop something where they'd have more than just Veteran and Veteran Hard Mode to challenge them. It was a way for us to create more gradient in difficulty."

By selecting which bosses your group wants to take on and when, you're able to customize the Trial's overall difficulty, and when you account for the fact that the Trial can be run in both Normal and Veteran mode, there's a huge amount of variation in difficulty to challenge your team.

The Asylum Sanctorium is a great Trial experience for both new and veteran groups.

The Asylum Sanctorium provides a full suite of rewards, including gear sets, achievements, and a skin, but this new Trial also drops two new types of items upon completion: Asylum Weapons and special Runeboxes.

Asylum Weapons are similar to the Master or Maelstrom Weapons you can get from the Dragonstar and Maelstrom Arenas that provide buffs to specific weapon abilities. For example, you could find a two-handed Asylum Weapon with the "Disciplined Slash" bonus that provides additional Ultimate when you use the Reverse Slash ability. Perfect for those wanting to deal massive damage up close.

With Asylum Weapons, the goal is to get more players interested in taking on this new Trial.

"Trials have always had this notion surrounding them of being exclusively for veteran players, and that's just not how our game works," says Rich Lambert, the game's Creative Director. "We wanted to get more people into the Trial to see how much fun it is to play with other people in large groups, and these powerful Asylum Weapon are a great incentive to do that."

Of course, there's plenty of unique loot for veteran players looking to challenge themselves, too, and the quality of the rewards offered in the asylum change to reflect its difficulty. For example, when you complete the Trial on Veteran Hard Mode, you will earn a "Perfected" version of an Asylum Weapon.

"Just as we wanted to encourage newer players to attempt Trials, we also we wanted to make sure our veterans had something unique after completing the Trial on the hardest difficulty," explains Lambert. "With the Perfected Asylum Weapons, you get a version of the item that looks different and is slightly better than the standard one, reflecting the greater challenge." 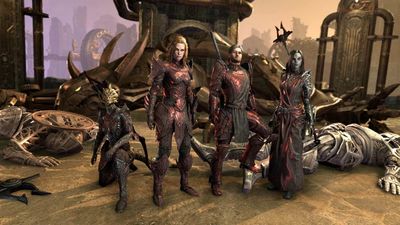 Finally, in addition to the Perfected Asylum Weapons, when you complete the Asylum Sanctorium on Veteran Hard Mode, you'll also have the chance—just a chance!—to receive an ultra-rare Runebox.

These Runeboxes contain a Clockwork Reliquary, a Polymorph that can turn your character into a mechanical factotum. What's more, as long as you don't open the Runebox when you first pick it up, you're able to sell it on the markets or give it away.

"Runeboxes are truly rare drops that are at the same time tradeable (not bind-on-pickup) and were the result of player feedback," says Lambert. "With the introduction of these rare rewards, we're addressing a long-standing request by giving veteran Trial players something unique that can be traded."

With the Veteran Hard Mode version of the Trial having a chance to drop these rare Runeboxes, players who have already mastered the Asylum Sanctorium and earned all of its rewards now have a great reason to continue to go back and run it again.

In the Asylum Sanctorium, you're able to customize exactly how challenging the Trial is, improving the quality of the rewards with each additional level of difficulty. Are you and your group ready to attempt this new Trial on the Veteran Hard Mode and face all three Saints together? Or will you take it slow and confront each boss one-by-one? Let us know how you plan to take on the Asylum Sanctorium on Twitter @TESOnline and Facebook!

The Clockwork City DLC game pack will release for PC/Mac on October 23 and PlayStation 4 and Xbox One on November 7 for ESO Plus members and to the in-game Crown Store.