The UESPWiki – Your source for The Elder Scrolls since 1995
< Skyrim: Quests: Side Quests(Redirected from Dragonborn:A New Debt)
Jump to: navigation, search

After the completion of the quest Reluctant Steward you will be made aware of a debt that Drovas Relvi owed to a money lender by the name of Mogrul. Now that Drovas is under the protection of Neloth and out of Mogrul's reach, Mogrul expects you to make good on Drovas' debt. To help entice you to pay the debt, he will send his thugs after you until the debt is paid.

There are multiple dialogue options when discussing this with Mogrul: 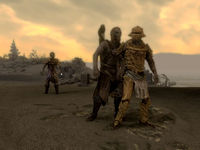 Mogrul's Thugs want all your money!

If you don't want to pay Mogrul, your only alternative is to kill him, with the risk of the Redoran Guard intervening to stop you. However, if you are observant of your surroundings while you are in Mogrul's hometown of Raven Rock you can detect Mogrul and his bodyguard Slitter approaching you to demand that you pay up if you haven't been informed of your debt yet. He will follow you out of town if you are patient and don't run too far ahead, allowing you to discreetly dispatch him without drawing the guards' ire. You can also visit Drovas and inform him of Mogrul's harassment. While he will not be willing to pay the debt on his own initiative, you can persuade him to provide you with whatever money he can to help you pay off the debt.

This Skyrim-related article is a stub. You can help by expanding it.
Retrieved from "https://en.uesp.net/w/index.php?title=Skyrim:A_New_Debt&oldid=2109615"
Categories:
Hidden categories: