"(Quest giver's name) is my name. This one is a little touchy, (player's first name). I have (random gold) gold for you if you will steal some (herb) for me. I assume you know what (herb) is? It's a highly addictive herb. Do you want the job?

"If word leaks out of this job, you know who I'll come looking for (player's name)." 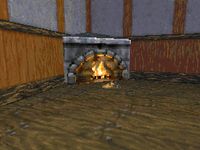 A bundle of indulcet drying before the fireplace

Head to the town where the burglary is to take place. Ask around to locate the residence, then enter it. Depending on the type of the residence and the time of the day, the building may be unlocked. However, it is best to be prepared to pick (or otherwise bypass) the door's lock. Find the herb within, grab it, and make your escape. Upon leaving the building, there may be a guardian waiting for you at the entrance door, either a battlemage, an iron atronach, a daedra seducer or a werewolf. Kill it and return to the Thieves Guild.

When you return to the quest giver and give him the herb, he will say:

"Just slip them into my pocket. Good. I don't think anyone saw you do it. Here's your (random gold) gold, (player's name)."