"You can call me (quest giver's name). I have wind of some (rare item) that some pig of a merchant just bought. I want to you pinch it an bring it here. I'll pay you (random gold) gold. Are you interested?"

"Move along (player's name). I need to find a thief worthy of the name." 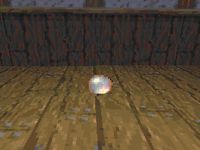 A rare pearl in the back room of a general store

Head to the town where the Merchant does business. Ask around to find the correct shop and enter it. If you attempt to enter while the shop is closed, you will need to deal with the door being locked, so be prepared. The item will often be a pearl or chunk of ivory, find it within and grab it. Make your escape, but beware as you leave the building, as there may be a guard waiting for you at the entrance door, either a battlemage, an iron atronach, a daedra seducer or a werewolf. Kill the guard and return to the Thieves Guild.

When you give the stolen item to the quest giver he will say:

"Oh ho! This shipment is better than I had thought. Here's your (random gold) gold (player's name). Don't spend it all on drink or vice."