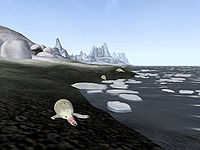 The dead horkers along the northern coast

Talk to shaman Korst Wind-Eye who will tell you about some ominous signs that have been appearing lately, such as the fire on the lake and, most lately, a horker massacre on the northern shores of Solstheim. Such things are suggested by the Bloodmoon Prophecy. Korst asks you to travel to Castle Karstaag to investigate the matter, as he suspects its denizens of the massacre. Karstaag is an ice castle to the northwest which is home to the frost giant Karstaag and the Rieklings who serve him. The Skaal have lived in peace with Karstaag for some time but they have not heard from the giant recently.

Travel to the castle which is at the far north of the island near the shore. It can be easily missed since it is an ice castle and looks like part of the landscape. Look for a tall pillar of ice near the shore and check your local map for the entrance locations. You can also follow the trail of dead horker carcasses along the shoreline. There are two entrances on the land (to the tower and to the throne room) and one underneath the water (to the Caverns of Karstaag). The underwater entrance was blocked previous to this quest. The tower entrance is accessible only with a levitation spell or equivalent (and does not provide access to the rest of the castle, but you can find the only piece of Daedric Right Pauldron), and the throne room entrance is blocked, so the underwater entrance is your only way in, as Korst suggested.

You enter the underwater entrance to the caverns which, fortunately, is short enough that you don't need any form of water breathing. Shortly inside you'll encounter a non-hostile Riekling named Krish who speaks to you. He says that the horker massacre is not their doing, and that Karstaag has disappeared. A Riekling named Dulk has been running the place since. Krish has been trying to take over, with some Riekling allies and some hired grahls, but the latter turned and ate most of them, with Krish being the last of the rebels left. The path upstairs has since been blocked. Krish makes a deal with you to help him get back upstairs. He knows the way and he figures that you can take care of the grahls for him.

You are now exploring the caverns along with Krish. There are a number of grahls patrolling the place and, fortunately, they are less powerful than the one you met on The Skaal Test of Loyalty quest to restore the Gift of Sun. Be warned that although Krish is relatively fast, he will not last particularly long in a fight, so guard him well. Alternatively, you can close the dialogue box as soon as you meet him and go kill the grahls on your own.

Once all the grahls are dead, return to Krish and you can then go directly to the Banquet Hall. Once you've killed all eight grahls, Krish will speak to you again, saying it is safe to enter. Continue into the Banquet Hall of the castle. It's important to keep Krish alive up to this point, as if he dies you will be unable to complete the quest normally. 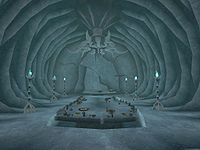 The Banquet Hall has a number of regular Rieklings in it, which can be confusing to fight since they look exactly like Krish (though his death at this point is of no consequence). Continue on to the Throne Room where you'll meet Dulk, another vocal non-hostile. Speak to him to learn that werewolves took Karstaag several days ago, and that the castle's residents had nothing to do with the horker massacre. Dulk seems unintelligent, but adamant that they know nothing of the horkers. Dulk dislikes Krish, and vice-versa, and Dulk even calls Krish evil. Dulk may be left alive, or not, after you've obtained this information from him, but it must be obtained before killing him or the quest will not be completable.

There are other rooms you can enter and loot without opposition; you'll find items laying around, in containers, and on skeletons of deceased Nords.

Tell Korst Wind-Eye in Skaal Village the information you've discovered. He will thank you, but is perturbed. He will give you the powerful but heavy Stalhrim Longsword of Flame, which he says will be useful when fighting grahls.

* Quest stage 85 is only a quest failure if Krish dies before opening the door to the Banquet Hall. If it occurs later, his demise has no effect on the quest.