The UESPWiki – Your source for The Elder Scrolls since 1995
< Blades: Items: Decorations
Jump to: navigation, search 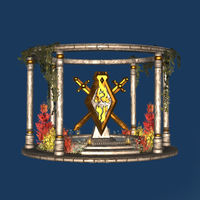 Emblem is a marble pergola containing colorful bushes and a large golden emblem at its center. This emblem resembles the icon for Blades: the Imperial dragon beneath the Red Diamond, crossed by two swords and crowned by the fort-like Town icon. It can be used as a large decoration.