The UESPWiki – Your source for The Elder Scrolls since 1995
< Elder Scrolls Online: Quests: Thieves Guild(Redirected from Online:Wedding Crashers)
Jump to: navigation, search
The merchant lord Cosh claims to have found Magnifica Falorah's dowry, and for his trouble she has agreed to marry him. Zeira suspects Nicolas, the treacherous former guildmaster of the Thieves Guild, is behind it all. She wants him to pay for his betrayal.

Talk to Zeira. She will tell you Cosh, who Nicolas' is using as a puppet, is about to wed Magnifica Falorah who is unaware of his ties to Nicolas. She plans to infiltrate the wedding and tell Falorah about Nicolas as to insure the wedding will not continue. She tells you you need an invite, and sends you to Silver Claw. Go to Silver-Claw, who will be acting rather upset. He tells you he did not receive a wedding invitation, and you need to steal one in order for him to be able to forge yours. She gives you two options. Either pickpocket Lord Wallavir's invitation or steal Lady Balina's invitation from her Mansion. Neither option should be too difficult, so go with whatever option you prefer. After you obtained one of the two, return to the Thieves Den after and speak with Silver-Claw. He will be delighted you can bring a companion, and tells you that after you choose and your companion need to get an outfit from Percius Loche to avoid standing out too much.

Choosing your Date and Outfit[edit] 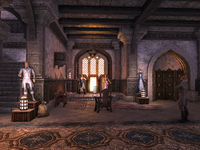 Choose a suitable outfit for the wedding

Choose someone to bring to the wedding, you have the choice of asking Quen, Walks-Softly, Silver-Claw, Velsa. When you ask them, you can give a logical reason why you want them by your side or you can confess your feelings. They will more easily accept the former reasoning. You can also ask Zeira, but she will decline no matter what, due to her own part of the plan.

After securing a date for the wedding party, go to The Diamond Thimble and speak with Percius. He will tell you all his outfits are suitable, so you can choose any you'd like. After you choose an outfit, Zeira will come in praising your outfit. She'll explain that she will go to the wedding as well, but the guards are likely watching out for her. Because of this, she tells you she needs you to distract the guards after you entered. Then, she'll give you your invitation. After this, go to the gate where you will meet your chosen date, now also dressed up. Talk to your date, then go to Muazel, who will be standing in front of the gate, to present him your invitation, after which you can enter the door behind him. 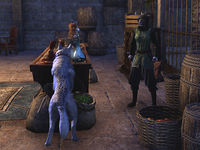 Once inside, talk to your date once more. You can talk to Zafrik, the gate guard. There is a persuade & lie option where you can tell him you're waiting for Falorah herself disguised as servant to join you, followed by another lie option telling him her cousins plans to usurp her, and they you plan to have him out himself by getting him drunk. Zafrik will fall for this lie, and goes to "check on a guest" to excuse his absence at the gate. The other option is to cause a distraction, which can be done either by luring a dog to the food table or by pickpocketing Sajhadi's locket.

After you distracted the guards, Zeira will enter. Talk to her. She'll tell you that the groom will be presented to his guests, and an eye needs to be kept on Cosh because Nicolas is likely close by. At this, Chief Inspector Rhanbiq will have an annoucement.

Chief Inspector Rhanbiq: "Everyone, I require your attention!"
Zeira: "This is it.—Stay close—let's see if Nicolas makes an appearance."
Chief Inspector Rhanbiq: "It's an honor and a privilege to introduce our host for the evening. May I present the impending husband of Magnifica Falorah … Lord Cosh!"
Cosh: "Welcome to my home! I must thank all of you for joining me on this momentous occasion."
Zeira: "That's Nicolas!"
Cosh: "Please, eat and drink your fill! Soon, I shall speak to you not as a humble merchant, but as a noble of Taneth!"
Zeira: "Nicolas is Cosh?"

At this revelation, Zeira will walk off in a daze. Speak with her to see what she wants to do. Zeira will tell you to split up and find where Falorah is to continue the plan. You will need to mingle with the guests and find where she is. Her cousin, Nebuin has some idea but you will need to prove yourself to have refined palette first before he tells you. You can then obtain a key to the Palace by pickpocketing one of the Wedding Servers. With both objectives completed, return to Zeira. Enter the Hubalajad Palace's kitchen and sneak to Cosh's bedchamber.

Once inside, talk to Falorah and tell her who Cosh really is. She won't believe you however, so Zeira locks her with you and your date inside the bedroom. Your date might mention Nicolas might have a hidden passage in his bedroom. The clue to the order of the candles is provided by the nearby book. The solution is to use the candles next to paintings depicting each season mentioned in the book. Thus, you have to use the candles in the following order:

A Fake Revealed and an Escape[edit] 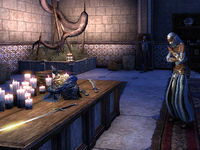 Solving the puzzle will cause a cabin to reveal itself as a hidden door. Inside the hidden room, part of the dowry as well as Danobia's crown still attached to the skull can be found. Talk to Zeira. She'll tell you she will use this to convince Falorah, and tells you to return to the wedding crowd. She puts you in charge while she's talking to Falorah. Go downstairs taking the hidden door to the storage and sneak into the wedding ceremony.

Zeira will then rush in to stop the ceremony, followed closely by Falorah. 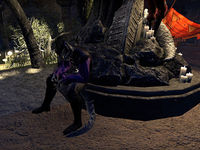 Does everyone know what happened at the wedding?
"Yes, Zeira's capture was an unfortunate turn of events.
But Nicolas is the Iron Wheel's prisoner as well. A small reason to celebrate."
What about Zeira?
"Magnifica Falorah has her dowry and Nicolas is behind bars. The Iron Wheel won't be here for much longer. We'll have a chance at freeing Zeira in the chaos of their departure—whenever that is.
But that's more your call, isn't it?"
What do you mean?
"Zeira said you were in charge until she returned to the Den. That makes you the acting guildmaster.
Boss."

With your abrupt promotion the quest is completed.

This Elder Scrolls Online-related article is a stub. You can help by expanding it.
Retrieved from "https://en.uesp.net/w/index.php?title=Online:Forever_Hold_Your_Peace&oldid=2383908"
Categories:
Hidden categories: