The UESPWiki – Your source for The Elder Scrolls since 1995
< Morrowind: Quests: Morag Tong
Jump to: navigation, search 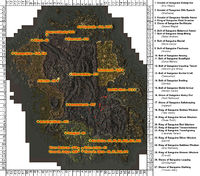 Map showing locations of all 27 items (click to enlarge)

Depending on how much exploring of the game you've done, you may have come across a number of Sanguine items that increase various skills when worn. These items are actually part of a collection of 27 created by the Daedra Lord Sanguine for the Morag Tong patron, Mephala. Twenty-six of the items can be found scattered across Vvardenfell - the last, the Amulet of Sanguine Enterprise, is held by the Morag Tong Grandmaster, Eno Hlaalu in Vivec.

Speak with Grandmaster Eno Hlaalu about the items and he will tell you that if you return all of the remaining 26, you will receive an elaborate reward from Mephala. You can return the items to Hlaalu at any time, though you must do so before you become Grandmaster of the Morag Tong and he disappears. Most of the Sanguine items are owned by Dark Brotherhood agents and Mehrunes Dagon worshippers who will generally attack you on sight, meaning you are safe from the law. Unfortunately, Eno will only give you the location of two of the items, so you'll have to find the rest yourself.

These NPCs are not hostile and have no related quest (see above list for more detail):

Once you turn in all 27 Sanguine items to Eno Hlaalu, you are rewarded with Mephala's Skill, a cheap spell that grants Chameleon 50 pts and Fortify Attack 10 pts for 60 seconds for 30 magicka and never fails. This is the only way of acquiring the Fortify Attack effect for creating custom spells.