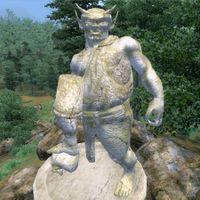 Sanguine, known to his worshippers as the Lord of Revelry "who tastes the Shaven Fruit",[1][2]:293 is a Daedric Prince whose sphere is hedonistic revelry, debauchery, wild orgies, and passionate indulgences of darker natures.[3][4]:11 As the Daedra Prince of Lust, Perversity, and Unnatural Sexual Relations, anything in excess is his motto.[5] He is considered by some to be one of the weaker princes.[6] Sanguine is depicted as a portly man with a dremora-like head with horns, usually with a bottle in his hand or a whore under his thumb.[7][8] He is thought to control thousands of small realms.[9] He is known to be allied with Vaermina,[10] while his enemies are Ebonarm,[10] the House of Dibella[11] and the Benevolence of Mara.[10] His summoning day coincides with Heart's Day, which falls on the 16th of Sun's Dawn.[12]

Sanguine has a reputation among mortals for not being "as bad" as other Daedric Princes, and is more likely than most princes to take an interest in mortal affairs.[13] Some see him as a harmless inveterate drunk due to his outgoing nature and his propensity for partying and drinking alcohol.[14][15] In spite of his vulgar nature, many consider Sanguine one of the more "sophisticated" Princes.[16] Those who worship him or appreciate his nature claim that Sanguine has never hurt anyone maliciously.[17] He enjoys playing pranks on others.[18] He is reputed for throwing the best parties in Oblivion, and celebrates at the drop of a hat. One instance of these spontaneous celebrations is the 400th anniversary of Sanguine's dog learning to play "undead", which occurred some time around 2E 182.[19] All manner of entertainment can be found at Sanguine's parties, such as stage plays, orgies,[4][5] bardic concerts, dancing, skooma,[20] arena fights and, of course, refreshments.[21] Food and drink are usually present, but Malacath is not.[22][UOL 1]

Partying with Sanguine can be a dangerous affair, as those who stay too long may not want to leave or are enticed to stay, and may end up dying there.[23] It is in Sanguine's nature to indulge the natures of others, particularly their darker desires—so to Sanguine, 'absolute control' is anathema.[9] The Daedra in attendance may also become violent towards mortal guests.[24] Sanguine welcomes all mortals to his shindigs, but those who enter must partake in the drinks there if they wish to remain. Those who drink from Sanguine's goblet will be bound to the party and unable to leave.[25][26] Sanguine's cultists have tricked entertainers into signing contracts that force them to perform endlessly for Sanguine's parties.[27] Some desperate mortals who have been forced to stay have committed suicide to escape.[27] Mortals who have business or families on Nirn may be tempted to abandon their families and responsibilities to stay forever.[28]

One of his possessions includes a red hat.[29] There exists wine in Sanguine's private stock that allows one to control the dead. When poured over a corpse, the spirit of the mortal that corpse belongs to can be commanded.[23] Scarlet bottles of a rare and expensive 'Sanguine's Rose' perfume are reputed to have aphrodisiacal properties.[30] 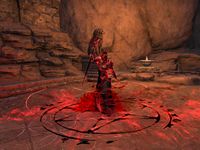 Sanguine is known to the Khajiit as "Sangiin": the Blood Cat, the Blood God of the Second Litter,[31] or the God of Death and Secret Murder.[32] According to the writings of Amun-dro, Sangiin is not evil by nature, but his sphere distracts Khajiit from the Path.[31] His sphere encourages people to seek out the urges of blood and pleasure without purpose.[31][33] "Sangiin's Midnight" is the term for when both moons are dark, and bright crimson red claw polish is used during this time.[34] His worship is hidden from the Cat's Eye, Magrus.[32] He is prayed to in secrecy in forbidden shrines.[35] Sangiin grants those born under the sign of The Serpent the gift of swift mending.[36] Wrist sheaths crafted from black leather have prayers to Sangiin written with metallic ink on the inside.[37] The trickster god Rajhin is said to have had a drinking contest with Sanguine.[38] It is alleged that Sangiin was the one who gave Khajiit the secret of wine by spilling the blood of the grapes.[39]

He is said to tempt Khajiit by making their flesh immortal.[31] Though of a darker nature, they are still drawn by his promise of filling their cups and tasting life as Sangiin desires.[40] There exists a number of Khajiiti vampire clans that worship Sangiin, so the promises of immortality likely entail being given the gift of vampirism.[41] The clans bind their spines in leather and gird their loins, as Sangiin does before a tempestuous night.[42] Vampire clans who are devoted to Sangiin often perform blood sacrifices. Their thralls may be driven to kill themselves[43] to bring forth a Hemo Helot, an orb of blood used in rituals or to empower vampires.[44] Powerful vampires can use Blood Magic to summon blood specters, and may do so while invoking Sangiin's name.[45][46]

Sanguine's worshipers drink, dance and make love to honor him.[47][18] They may wear a red lipstick to proclaim their dedicated commitment to passion,[48] and breed goats with eldritch glowing eyes to partake in their Daedric rituals.[49] Some worship Sanguine because they think "normal" life is too boring, and they would simply rather be partying than going to work or being with their families.[28][50] He inspires perversions in the wild and meek to seek illicit pleasures.[UOL 2] During particularly heinous Sanguinary feasts, revelers wear their masks, but in scenarios where their identity can be seen they are willing to assassinate any uninvited guests who witnessed them.[51] Attendants of the Temple of Dibella may also be invited to their parties for extra company.[20] In Cyrodiil, those seeking to speak with Sanguine usually offer a bottle of Cyrodiilic Brandy to one of his shrines.[47] In Elinhir, the youth of the gentry give each other licentious presents during Saturalia that are intended to dare the recipients into lascivious behavior, though the giver's name is never revealed—it's up to each recipient to guess who their 'Secret Sanguine' was.[UOL 3] It is not difficult to find worshipers of Sanguine during the holiday Carnaval,[52] a portmanteau of carnal and carnival.

The Reachmen have no use for Princes such as Sanguine and Clavicus Vile.[16]

Although the term "sanguine" means a crimson or bloody red liquid,[53] the definition of the word is actually based off Sanguine's name, as the names of Daedra predate the concepts they connote.[54] King Hale the Pious introduced four of the Daedric Princes to the written record almost a thousand years after the publication of the Alessian Doctrines in one of his tractates when he wrote that the wickedness of his political enemies was comparable to the depravity of Sanguine.[55] Sanguine has been a favorite for several Emperors since the foundation of the first Empire. During the reign of Reman Cyrodiil records indicate Sanguine resided in White-Gold Tower where he is said to have helped Reman with the dubious draftsmanship of the Crendali Festivals. The vulgarities found within these festivals did nothing but hinder Imperial expansion efforts within the Summerset Isles during Reman Cyrodiil's tenure.[UOL 4] 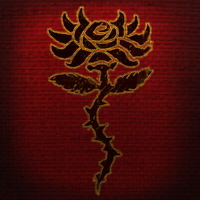 In 2E 582, several Aldmeri Dominion spies entered Sanguine's Demesne and drank from Sanguine's goblet, binding them to the party and rendering them unable to escape.[25] That same year, Sanguine was recognized as a public menace by the authorities in Stormhold, and a bounty was put out for his cultists.[56] Stormhold's citizens knew to stay away from the nearby temple to Sanguine.[57] When the dragon Sahrotnax crashed into Moongrave Fane, the Hollowfang Clan considered it a great boon from Sangiin and performed many rituals in his name to prepare feasting upon the dragon's blood.[58]

Sometime before the Oblivion Crisis, Martin Septim was involved with Sanguine's cult and obtained the Sanguine Rose. An incident in the cult, presumed to have been caused by the dangers of the Rose, left many of his friends dead, and Martin thereafter dedicated himself to Akatosh. The forbidden knowledge on Daedric magic he had gained from the cult, however, was instrumental in bringing about an end to the Crisis.[59] In 3E 433, Sanguine enlisted the Hero of Kvatch to sabotage an excruciating uptight party of Leyawiin Countess Alessia Caro, where she and her guests suddenly found themselves stripped of all their possessions—clothes included, leaving a lasting impression on her otherwise formal public image.[18][60] In 4E 201, Sanguine, in the guise of a Breton named "Sam Guevenne", challenged the Last Dragonborn to a drinking contest. The events that followed culminated in the Last Dragonborn entering one of the Myriad Realms of Revelry and receiving the Sanguine Rose. This is one of the most recent recorded instances of Sanguine manifesting on Nirn.[61]

Several varieties of Daedra are known to serve Sanguine. Among them are Ogrim, Dremora, Dark Seducers,[62] Banekin and Scamps.[63][64] The Ogrim serve as bouncers at Sanguine's parties.[63]

Sangiin's Thirst is known to manifest as bloody spectres resembling Khajiiti gargoyles.[65] Blood can also be animated in the form of orbs called Hemo Helots or moving coagulant slimes.[44]