The UESPWiki – Your source for The Elder Scrolls since 1995
< UESPWiki talk:Oblivion Map Design
Jump to: navigation, search

I've written some code along the lines suggested by Killfetzer above to colour the water tiles on our map blue. Here are some tiles showing the initial results: 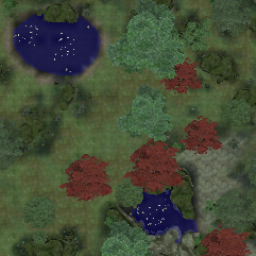 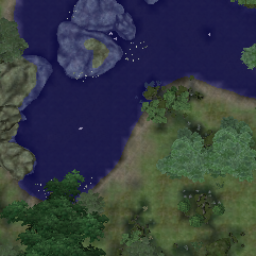 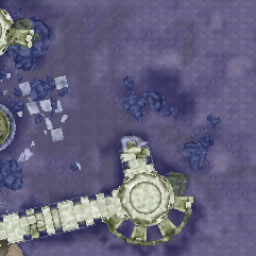 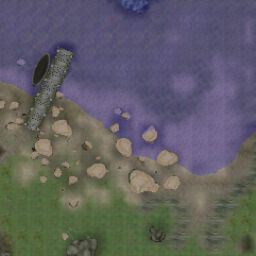 You can see how they look at the moment here, here, here and here.

So do people like these shades of blue? I can change it to pretty much whatever we like, and I'd rather get people's impressions now because there's still quite a bit of work to do on these before they go live.

Personally, I prefer the versions I made by mistake, but I think they make the water stand out a little too well! 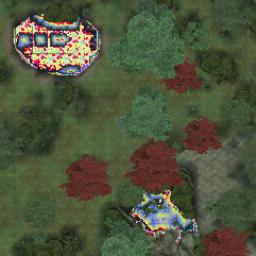 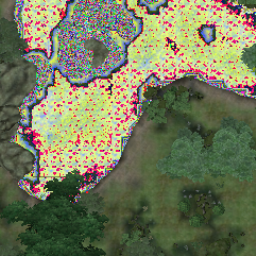 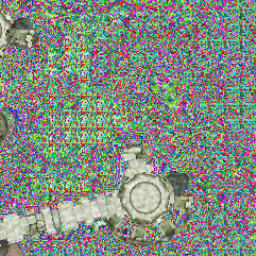 Wow! Really good stuff! I've been waiting for ages to have some blue water on the map - going in-game I just didn't find all that murky stuff the map showed ;) But seriously, I think it's a wonderful idea and Killerfetzer deserves a massive thank you for it. I prefer the two images to the right (top row of course :P) as the give a sense of transparency and let the rocks underneath show.
On a side note rpeh, I just realised that the Tamriel map on that German site may be an excellent base for TR3 maps... Of course, we'd ask for permission ;) --SerCenKing Talk 18:01, 9 October 2010 (UTC)

Ah. Actually, all the tiles in the top row use the same setting. Look at the current map and you'll see that the lakes are much darker than the rivers and lakes, although that can vary too - check out how the Strid river changes colour along its course. I'll try to lighten the lakes up a little, but there may not be too much I can do. rpeh •T•C•E• 18:36, 9 October 2010 (UTC)

That looks great, rpeh. It may be just me (or my monitor), but it looks like it has a slight purple cast to it, so if you're lightening it anyway, maybe lighten the red channel a bit more. I'm looking forward to seeing blue water! – Robin Hood↝talk 20:53, 9 October 2010 (UTC)

(o/d) Okay, how about these versions? Lighter and less red. 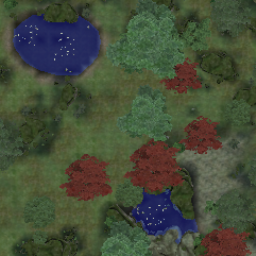 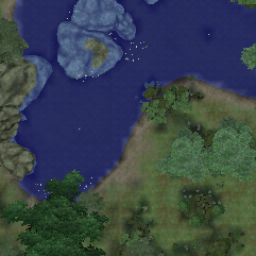 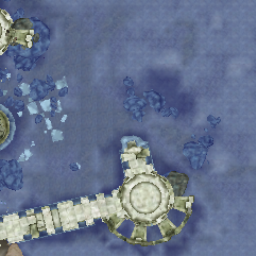 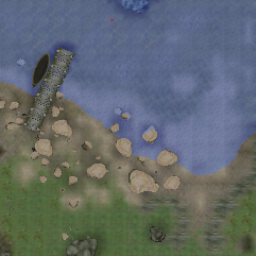 Getting the two types of water to match perfectly isn't going to be possible without spending way too much time on things. Better? rpeh •T•C•E• 22:11, 9 October 2010 (UTC)

Much! That looks perfect to me. Out of curiosity, what causes the different shading? Is it just a matter of depth, or something else? – Robin Hood↝talk 00:47, 10 October 2010 (UTC)

I'm not quite sure. I assume it's the colour of the underlying terrain. You can see the German version has the same issue, although to a lesser extent. I'm sure there are ways of improving what I've got here, but it'll need more expertise in image processing than I possess. I'm already doing a kind of weird colourisation hack followed by a gamma correction but if anybody has a good idea for an improvement, I'm all ears. Oh - it takes about 30 minutes to run rather than 12 hours ;) rpeh •T•C•E• 09:20, 10 October 2010 (UTC)

Wow! I do kind of prefer the ones you made by mistake but they'd have to be made transparent before that could work :D. Seriously though this looks great, although if we could clear up the river changing colors it'd be better still. Also if you look at the Niben Bay there seems to be something weird. Some kind of little squares is probably the best description but I'm not sure what causes it. I'm off to check our map though to see if it was introduced with the colored water.--Ghurhak gro-Demril or TAOYes? 20:18, 10 October 2010 (UTC)

Hmm. Could someone get rid of it somehow? Also why wasn't it gotten rid of when the artifact remover was used on it? (No accusations intended. I'm curious about this stuff.)

I can probably clean it up by copying tiles around. The artifact remover isn't intended for that kind of thing. It just does the red and green dots, orange yellow and red boxes, etc that mark CS items. The other way, of course, would be to manually delete them using a mod and then generate the maps, but I'm not sure if that would work or not. rpeh •T•C•E• 18:40, 11 October 2010 (UTC)

Right, I've uploaded another version of the [[:File:Zoom12.jpg|zoom12]] image. This makes the water a little lighter still, removes the "little squares" in Topal Bay, adds the Strange Door in Niben Bay, and I've made a start on the hi-res versions of the cities, although it doesn't make much difference at this size - compare the hi-res Arcane University to the low-res Prison for an example.
As a side note, I've re-written the way in which the artifact remover processes things, which will hopefully mean doing the SI map will be less of a problem when I get around to that. Any other changes people would like? rpeh •T•C•E• 21:55, 11 October 2010 (UTC)

\=>This is looking good rpeh, even from the monitor I'm using at this location. The differences between the AU and the Prison District are visible even at this view. If you know the kind of shadowy building indicators are present on the Tamriel map, you know the value of adding in the city worldspaces. --Timenn-<talk> 08:34, 13 October 2010 (UTC)

Okay... The squares I'm referring to are way down in the Topal Bay, right around where i ends on our map. And they're still there in the version you linked to of our map.--Ghurhak gro-Demril or TAOYes? 23:19, 11 October 2010 (UTC)

Not sure where you want non-bug comments, so I'm sticking it in here. :) I just wanted to say that you've done a very impressive job with everything. I was especially impressed with Culotte, where you've got the partially-submerged ruins all correct. I did a quick skim around most of the main waterways and didn't spot anything else out of place besides the Anvil bridge. – Robin Hood↝talk 15:19, 18 October 2010 (UTC)

Okay, the current version of the coloured map tiles is up on the test map. If people could spend a few minutes looking around and post any problems they find, that'll be great. I've already found two things on the full-size map that I couldn't spot on lower zoom levels so it's worth checking. The kind of things I mean are areas coloured blue that shouldn't be; areas not coloured blue that should be; odd lumps of colour and anything else that looks wrong. Even posting a note that you spent some time looking and couldn't find any problems would be helpful. I've got a lot of stuff to do at the moment but I hope to be able to finish the hi-res cities this week, regenerate the map and tell Daveh it's ready to move onto files1. rpeh •T•C•E• 10:17, 18 October 2010 (UTC)

I thought I'd see how everything worked on SI, and the answer is "Not bad". [[:File:Zoom14.jpg|Here]] is my first test run (zoom 14 this time - it's smaller than the Tamriel map). You'll notice the orange mushroom trees look a little odd, and you might be able to spot a few places where weird things appear because the artifact remover is tuned for Tamriel at the moment. Not bad for a first go, though. Again, comments... criticisms... rpeh •T•C•E• 23:27, 11 October 2010 (UTC)

Update: Except for those little white dots... Did Sheogorath decide to fill the pit with clouds this time?--Ghurhak gro-Demril or TAOYes? 23:31, 11 October 2010 (UTC)

I think that the water is somewhat too blue. I'm currently constructing a German SI map and I choose a more greenish blue (Example).
Also we've "solved" the tree problem (Problems with the SI Map). The solution proposed by Nephele is a stable solution. You can generate each 3x3 cell block and the trees will be correctly displayed. Sure this is a little time consuming task but I think it was worth it. And after all it were only 224 map generations, roughly 2 hours ;-) If yo want I can give you our base zoom tiles. --Killfetzer 22:11, 12 October 2010 (UTC)

I deliberately made it blue rather than green - it's the one thing about your map that I don't like.
The tree thing... yes, I discovered that small blocks will generate the trees properly. Do you still have the DDS images for the tiles? That's what I need. rpeh •T•C•E• 10:02, 13 October 2010 (UTC)

First, I know the markers don't match the map. That's caused by me having extra tiles to the west and north for some reason, and shouldn't be too hard to fix. For my notes, the offset is two tiles horizontally and three tiles vertically - here is Flooded camp on the current map, and here it is on the coloured map. Fixed - you may need to do a hard refresh to fix it though.

I've put in the time and done the detailed export to get all the trees showing on the map too. This seems to have caused one or two odd problems like this where things don't match up properly. That might be a mistake on my part, but we'll have to see. Please list any other problems. Hmm... another one here, which is worrying.

I'm aware that my attempt to get the hi-res version of Bliss right hasn't worked. The simple reason is that the tiles for the in-city and out-of-city versions don't come close to matching, and hacking it by hand across tile boundaries is tricky. I'll fix that though.

Obviously, the biggest change is the water. I don't think there are any problems this time - I've learned from my experience doing the Tamriel version. I love the way even the puddle in the Fringe is picked up!

i've used Open Cities for New Sheoth. This mod solves at least the different wall geometry in Bliss and Crucible. The palace must still be done manuell. The eastern part is an exact match but the small gardens in the west have diefferent sizes in the SEWorld an the palace world space. --Killfetzer 22:12, 27 October 2010 (UTC)