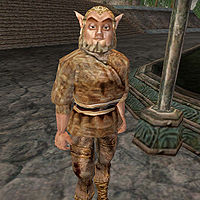 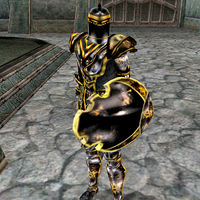 Gaenor in his ebony armor

Gaenor is a Bosmer pauper, who claims to be an "entrepreneur of sorts". He stands in front of the Mournhold Temple, approximately halfway between the large steps outside the palace and the double-doors to the palace courtyard, asking people for increasingly outrageous sums of money.

Regardless of whether you give him some funds or not, he will not be very pleased and will yell at you for your kindness or lack thereof (depending on how you deal with him). After leaving the Temple Courtyard, he will return three days later. Once you approach him, he will speak to you and initiate combat, leaving you with no choice but to kill him.

Before he disappears, he only wears common pants with a matching shirt. When you see him the second time, he will be wearing a full suit of ebony armor, along with his eponymous amulet, exquisite pants and a matching shirt. Gaenor's weapon comes in the form of an ebony longsword. He will also have become a warrior, and possesses unnaturally high stats (155 Strength and 255 Luck) along with a unique set of constant effect abilities;

Aside from these effects, his natural resistance to disease, and the ability to command animals, Gaenor knows no spells, apart from one he uses only once to disappear if attacked during your first encounter with him, known as Gaenor's Escape.