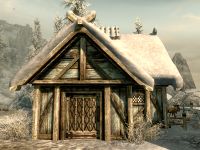 Wulf Wild-Blood's House is on the west side of the central square in the village. It is between Oslaf's house on the left and Edla's house on the right.

You enter into the main room of the two room home. On your left is a long table and bench against the south wall, there are chairs at either end as well. On the table is a mead barrel, a bowl containing three loaves of bread, there are two snow foxes pelt, a bottle of alto wine, a green apple, an eidar cheese wedge and a wooden bowl containing hawk feathers. Above the table is a wall shelf with animal skulls on it. There is also an open crate containing a deer pelt and a quiver of iron arrows against the south wall. In the southwest corner is a cupboard with a goat hide, a horker tusk and a wooden bowl containing a cabbage on the shelves. To the right against the west wall is a barrel with a mead barrel on top and a chair. To the right of these is a pair of wall shelves containing three fillets of horker meat, a bottle of ale, a horker tusk and two sacks. 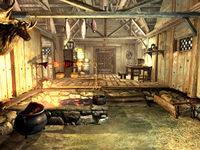 In the northwest corner is a doorway to a storeroom and to the right of this along the north wall is a fire pit complete with cooking spit. In the fire is a cast iron pot containing a horker loaf and a portion of clam meat. Around the fire is a kettle containing a joint of venison, a cabbage and a potato. To the right of the entrance is a stack of four barrels and a sack. On one of the barrels is a basket containing two cabbages. A set of shelves are to the left containing a leg of goat, a fillet of horker meat, two bottles of ale and one bottle of alto wine. On the left of the shelves is a sack and between this and the fire pit is the doorway to the bedroom.

Walking into the bedroom, there is a single bed on the left against the wall with a pair of boots underneath. Beside the bed is a dresser with a set of clothes and a bowl containing a gourd on top. There is also a chair in the northeast corner. Entering the storeroom, there is a narrow table against the west wall on your left with a pair of iron boots underneath and a hunting bow on the floor. There is a chair beside it. Against the north wall is an end table with a wooden plate containing a loaf of bread on top. Against the east wall that separates this room from the bedroom is a shelf containing a horker tusk and underneath a pile of firewood, two of them loose with a bucket containing six large pieces of charcoal with one more piece on the floor.