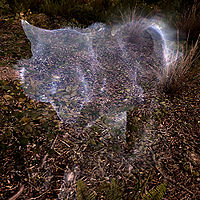 The Wolf Guardian Spirit is a spectral wolf found in a wolf den with several regular wolves. It will not appear until you are on the part of the quest that asks you to hunt it.

Despite being spectral in appearance, the Wolf Guardian Spirit seems to retain all aspects of a normal wolf and is killable with normal weapons. When killed, it will leave behind ghostly remains, but the loot table matches a normal wolf as well.