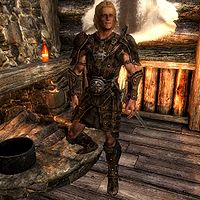 The Wary Outlaw is a Nord warrior who may appear in the Bee and Barb in Riften during the quest The Dark Brotherhood Forever. He will only be enabled if the Night Mother picks him as the contract giver.

He will be chosen randomly from a list of ten people who performed the Black Sacrament and want someone killed. When approached, he will choose between a total of ten possible targets, hand you a leveled amount of gold and blindly expect you to carry out the task.

He spends all of his time in the Bee and Barb awaiting the arrival of the Dark Brotherhood. He spends much of his time nervously pacing around, but may occasionally sit down to relax or have a quick bite or drink.

He wears a set of leather armor, including the bracers and boots. He also wields an iron sword and carries a copy of A Kiss, Sweet Mother.

He shares his dialogue with the nine other potential quest givers; see this section for details.