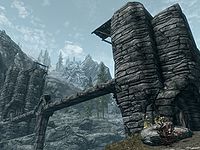 The towers straddle the White River along the main road east of Whiterun. They support a stone bridge that spans the river high above. Along the road just outside the southern tower is a cookpot often attended by a bandit who will attempt to extort a toll when approached. The southern tower contains a chest at its base, rigged with a swinging mace trap. The trigger may be deactivated by picking a leveled lock. Stairs inside rise to the second level, from which an exterior wooden ramp leads up to the bridge and the third floor of the tower. At the top is a platform normally guarded by an archer. A second archer patrols the bridge between the towers.

Across the bridge, the northern tower has two interior levels, with a dresser on the first floor and an alchemy lab on the second. A copy of the Archery skill book The Black Arrow, v2 can be found on the bedside table on the second level. Above this is a platform where you can find the bandit chief, who carries a randomly enchanted weapon. A randomly enchanted bow can normally be found abandoned on the table here.

The first floor has a second door leading out onto the mountains. An iron ore vein is located immediately north of the door, and to the right is stationed another archer whose chair is near a corundum ore vein. There is a second corundum vein a short distance to the east of this.