Return to the Thieves Guild after your search at Riftweald Manor to show Brynjolf Mercer's plans for stealing the Eyes of the Falmer. Brynjolf will explain the significance of your findings; Mercer plans one more heist before disappearing for good. The only hope of catching him is to intercept him at the location. Brynjolf informs you that Karliah has requested to speak with both of you.

When you speak to Karliah, she reveals to you and Brynjolf that Mercer Frey was a Nightingale, an agent of Nocturnal. Because of this, Karliah is concerned about being at full strength and on equal footing before pursuing Mercer. She asks you and Brynjolf to meet her at The Shadow Stone outside of Riften.

Here you will find yourself at the entrance to Nightingale Hall wherein is the edge over Mercer that Karliah was alluding to. Proceed inside, but don't get too far ahead as Karliah begins telling you more about the Nightingales and their role. She will later remark that this was the Nightingales' base, and that she will return here once done with Mercer. After crossing a bridge, you can find a copy of the Pickpocket skill book Purloined Shadows to the right.

Your first stop is the armor chamber. Activate the stone Karliah indicates and the Nightingale Armor is placed in your inventory. You must equip it in order to continue. Once you have donned the armor, Karliah will discuss the next step: your sworn oath to Nocturnal. Follow Karliah further into the cave past side passages leading to sleeping quarters where you can find a copy of the Sneak skill book The Red Kitchen Reader and living spaces. 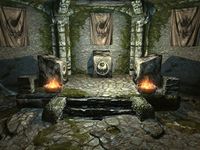 The first step towards your induction.

Once you have agreed to Nocturnal's conditions on becoming a Nightingale, Karliah will operate the pull chain for the gate leading into oath taking chamber. You will be directed to stand on a specific platform. If you have a follower with you, their presence does not affect the outcome in any way. Karliah summons Nocturnal and asks to resume her role as a Nightingale as well as induct you and Brynjolf into their ranks. Nocturnal agrees.

Now that you are officially inducted into the Nightingales, Karliah will explain that Mercer got into the vault by using the Skeleton Key which he stole from the Twilight Sepulcher; a grievous insult to Nocturnal which threatens the very foundations of the Nightingales. The key needs to be returned to the Sepulcher to set things right and return the uncanny luck of the Thieves Guild.

This is a big day for you as now Brynjolf has something to add. With Mercer disgraced, the issue of the leadership of the Thieves Guild is at hand. Brynjolf states that he and Karliah think you would be the right person for the job, once you've proven yourself by dealing with Mercer and completing all of the Thieves Guild additional jobs. From here, leave for Irkngthand to begin Blindsighted.

Notes
* Any text displayed in angle brackets (e.g., <Alias=LocationHold>) is dynamically set by the Radiant Quest system, and will be filled in with the appropriate word(s) when seen in game.

This Skyrim-related article is a stub. You can help by expanding it.
Retrieved from "https://en.uesp.net/w/index.php?title=Skyrim:Trinity_Restored&oldid=2577512"
Categories:
Hidden categories: