The Torturer is an elderly destruction mage who practices his art on behalf of the Imperial Legion in its efforts to wipe out the Stormcloak rebels. You will encounter him in Helgen Keep shortly after entering it during the quest Unbound.

He wears a set of Imperial light armor with matching boots and bracers, along with a torturer's hood. He wields a steel dagger and, being a mage, uses the Sparks and Lesser Ward spells.

If you entered the keep with Ralof, the torturer and his assistant will turn hostile on sight.

If you entered the keep with Hadvar, you will encounter the torturer and his assistant battling two Stormcloak soldiers amidst the corpses that litter the room. Should he survive, he will immediately engage in conversation with Hadvar: 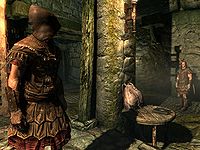 "You have no authority over me, boy."

Torturer: "You fellows happened along just in time. These boys seemed a bit upset at how I've been entertaining their comrades."
Hadvar: "Don't you even know what's going on? A dragon is attacking Helgen!"
Torturer: "A dragon? Please. Don't make up nonsense. Although, come to think of it, I did hear some odd noises coming from over there."
Hadvar: "Come with us. We need to get out of here."
Torturer: "You have no authority over me, boy."
Hadvar: "Didn't you hear me? I said the keep is under attack!"
Assistant: "Forget the old man. I'll come with you."

At this point, Hadvar will notice a dead mage locked in a cell and say:

Hadvar: "Wait a second. Looks like there's something in this cage."
Torturer: "Don't bother with that. Lost the key ages ago. Poor fellow screamed for weeks."
Hadvar: "See if you can get it open with some picks. We'll need everything we can get."
Torturer: "Sure, take all my things. Please."

Should you approach him, he will simply say, "Leave me to my work. Unless you plan to stay and help?" When you leave with Hadvar (and the assistant if he is alive), he will just comment, "There's no way out that way, you know..."

Should you murder him and/or his assistant in cold blood, Hadvar will not turn hostile even if you do this right in front of him, nor will it incur a bounty or any other negative consequence. In fact, Hadvar might even subtly encourage your actions by commenting, "These bastards call themselves Imperial Legionnaires..."