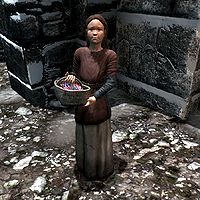 Sofie is a Nord child who wanders around the streets of Windhelm selling flowers from her flower basket. Starting her day at 8am, she sells her flowers for nine hours until 5pm. After that, she finally rests and can usually be found sitting near the New Gnisis Cornerclub. After three hours, she heads back to the barrel at the back of Niranye's house and sleeps until 8am. She will then repeat her schedule the following day.

When she spots you during the day, she will approach you and ask "Would you like to buy some flowers? Please?" If you answer positively and ask what she has, she'll tell you "Not much. But I hope you like them!" and a standard merchant menu will open up. Alternately, you can either politely decline or rudely dismiss her, to which she'll answer "Oh, I... okay. Sorry." Regardless of your choice, you will have an option to ask her what she's got for sale the next time you talk to her, as well as an option to ask about her parents' whereabouts. If you inquire about her parents, she'll inform you "They... they're dead. My mama died when I was little... I... I don't remember her very well. My father was a Stormcloak soldier. One day, he left and... didn't come back. I'm all alone... I... I try to sell flowers so I can buy food. It's not much but... what else can I do?"

You will then have a dialogue option to adopt her. You can only go through with the adoption if you have a house with a child's bed and container. If you do not adopt her, she will exit the conversation with "Thanks... Thanks for talking to me."

With the Merchant perk, she also sells flower baskets.

This Skyrim-related article is a stub. You can help by expanding it.
Retrieved from "https://en.uesp.net/w/index.php?title=Skyrim:Sofie&oldid=1461665"
Categories:
Hidden categories: