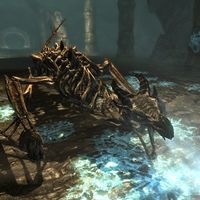 The Skeletal Dragon is a unique undead dragon found within Labyrinthian during the quest The Staff of Magnus. When killed, it provides a large amount of dragon bones but no dragon scales, and it will not provide dragon heartscales when struck with Kahvozein's Fang. It does not have a dragon soul.

The Skeletal Dragon is an undead creature, and thus is vulnerable to sun damage. It also has weakness to fire damage. Unlike other dragons, the skeletal variety doesn't possess blanket immunity to Illusion spells, however the Master of the Mind perk is required to make Illusion magic effective against it.