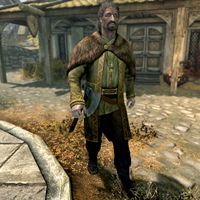 Olfrid Battle-Born is a Nord warrior who is widely known in Whiterun as head of the Battle-Born Clan. He and his family are known to harbor animosity for the rival clan in the city, the Gray-Manes, as well as being staunch supporters of the Empire.

Aside from feuding with the Gray-Manes, Olfrid is also known to be an important client to the Thieves Guild, which after helping him save a friend, he helps to spread influence of the guild to Whiterun.

If Whiterun falls to the Stormcloaks, Olfrid, if you ask, bitterly complains that he and his family are subject to persecution for their Imperial sympathies in the form of robberies, which he suspects to be the work of the Gray-Mane patriarch and new Jarl of Whiterun, Vignar Gray-Mane. Like his son Idolaf, Olfrid will also wish out loud that the Empire will send reinforcements to retake the city.

Olfrid wears a set of fine clothes and a pair of fine boots, and is equipped with an iron war axe. He carries a key to the clan's house, and a selection of common loot and gold.

If you ask Olfrid why there's a feud with Clan Gray-Mane, he will provide you with his opinion on the one item that has created tensions between the two clans: "Money, you laggard! What else? It always comes down to coin. The Gray-Manes have deep roots in Whiterun, but so do we. Difference is, we're rich, and Vignar hates it. Oh, and they hate it, too. All their big talk of pride and honor, and what have they got to show for it? Beggar's rags and stale bread. We've got the same pride, the same honor, and we've got wealth. No wonder they envy us." If you ask him to tell you about Clan Battle-Born, he will gladly tell you about the legacy of the clan: "Battle-Born is a name out of legend, sung in the songs of old and heard in deeds of valor for a hundred generations. 'For Clan Battle-Born!' they cry in the mead halls. 'First into the fray and last to quit their ale!' We've got honor. Wealth and titles, too. Aye, and buxom women to warm your bed on a cold Skyrim night. Now if that don't answer your question, then no words will."

This Skyrim-related article is a stub. You can help by expanding it.
Retrieved from "https://en.uesp.net/w/index.php?title=Skyrim:Olfrid_Battle-Born&oldid=1506545"
Categories:
Hidden categories: