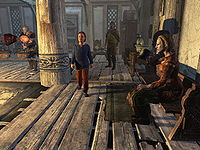 The Battle-Borns are a rich, influential clan in Whiterun who are staunch supporters of the Empire and the Imperial Legion. Before the civil war, the Battle-Borns were old friends with their neighbors, the equally venerable Gray-Manes. However, since the Gray-Manes have sided with the Stormcloaks, the clans are now feuding.

House of Clan Battle-Born stands across the street from the Gray-Mane residence. Olfrid is the clan's vocal patriarch. Other Battle-Borns include Alfhild, Bergritte, Idolaf and Jon. Lars is the youngest member, who is usually seen being bullied by fellow child Braith.

The Battle-Borns may be involved in the abduction of Thorald Gray-Mane, a strong supporter of the Stormcloaks, by the Thalmor. The Battle-Borns' success is due in part to their owning Battle-Born Farm just outside the city, which is a very lucrative business.

The Family Tree of the Battle-Borns is as follows:

This Skyrim-related article is a stub. You can help by expanding it.
Retrieved from "https://en.uesp.net/w/index.php?title=Skyrim:Battle-Born&oldid=2188619"
Category:
Hidden categories: