Nix-Hounds are insectoid creatures added by the Nix-Hound Creation. Originally native to Morrowind, they have been introduced to the island of Solstheim in recent years. For more information, see the lore article. 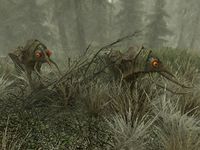 Wild Nix-Hound enemies can be found throughout the wilderness of Solstheim with this Creation installed. They can be found alone or in small groups, and will attack on sight. 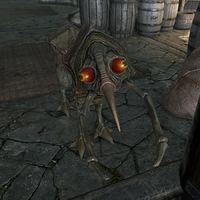 A pet Nix-Hound can be purchased from Revus Sarvani (or Geldis Sadri if Revus is already dead) as part of the related quest.

The nix-hound is essential, and will not engage in combat. Its main function is to carry items, and it has a carry weight of 75 and it will follow you even if you already have another pet following you. You can instruct it to wait at a city, wait at its current location, wait at your house, or to carry items. It can also be summoned using a teleportation spell. The nix-hound cannot be detected by Detect Dead or Detect Life.

The pet nix-hound has an ability that will occasionally give you a random ingredient. When this happens, you will receive a message saying, "Nix-Hound found something..." and the ingredient will be added to your inventory.

This ability will start working as soon as the creation has been activated - you can receive items from the hound even before you have purchased it[verification needed — See bugs]. Four to eight hours of game time after becoming active, you will get your first ingredient. Thereafter, every 16 to 25 hours of game time you have an 80% chance of again getting an ingredient.

The ingredients will be randomly chosen from two leveled lists appropriate to the area you are currently in - the hound distinguishes between being either in Solstheim, or not. For example, you can get Ash Hopper Jelly while in Solstheim, but not while in mainland Skyrim. Other than that, any base game ingredient or Dragonborn ingredient can be gifted to you - but not ingredients added either through Dawnguard or Hearthfire.