This article is about the NPC added by Dragonborn. For the NPC in the original game, see Nikulas. 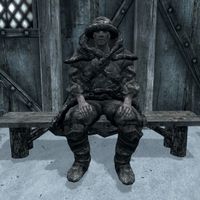 Nikulas is a Nord living in Skaal Village. He lives with his mother in their house.

He wears a Skaal coat, with a pair of Skaal boots and a Skaal hat. He wields a leveled one-handed weapon, and carries the key to his house and a selection of common loot and gold.

During The Fate of the Skaal, Nikulas will be found helping Storn and Finna maintain the village's magical shield. Upon talking to him, he'll tell you either "Storn will protect us. We will be safe.", "We are only safe so long as we concentrate...", or "Do not break our concentration."

When you ask Storn to give out the secrets of the Skaal to Hermaeus Mora, Storn will end up betrayed and killed. During this, Nikulas may exclaim, "All-Maker, please help him!" As Storn lies dead, Nikulas will continue with either "Poor Storn. I can't believe it." or "Frea... what happened? What was that thing? I thought the village was safe now."

At other times, when you talk to him, Nikulas may greet you with "I've seen outsiders in our village before, but none were like you.", "Perhaps I'll be the first Skaal to slay a dragon. That would be worthy of a tale!", "Fanari says the Nords of Skyrim have many gods, but none are as wise and powerful as the All-Maker.", "Sometimes I wonder if we're the only Skaal. Could there be more villages like ours?", or if you have completed Lost Legacy, "I heard that you and Tharstan explored an ancient crypt. That sounds like an exciting adventure." Should you leave him, he may say either "You need to leave? Alright." or "I'm sure you have more important things to do. Farewell, then."

He can occasionally be seen arguing with his mother:

Edla: "I wonder sometimes if you are truly happy here, Nikulas."
Nikulas: "I know why you're asking, mother. I am happy here, but I want to know more of the world outside our lands."
Edla: "I know that Tharstan has filled your head with stories, but those stories don't tell of the dangers and hardships of the world."
Nikulas: "I don't fear hardship and danger. I am Skaal. The only thing that I fear is not to follow my heart, and to die an old man filled with regret."
Edla: "My heart is still wounded from the loss of your father. I cannot lose my only son so soon after. When time has worn away my grief, then you can go with my blessing."
Nikulas: "Very well, mother. I will stay for now."

Explaining to him that his mother tells you that he wants to leave the village, he'll confirm, "That's right. I want to go out into the world and earn great glory. I want to hunt the deadliest creatures and claim vast riches. I am weary of living in this village. I want to do something with my life other than farm, fish and hunt deer. I know it must be hard for an adventurer such as you to understand this, but we Skaal live very boring lives." You have three options, all of which will attempt to make him stay in the village:

If you have passed the speech check, Nikulas will end with, "I can see that in my eagerness for adventure, I have forgotten my duties as a son and as a Skaal. You have helped me to see wisdom, and I thank you for that, Skaal-friend."