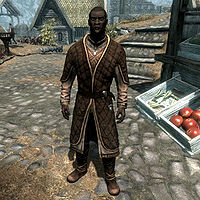 Nazeem is a Redguard citizen and the owner of Chillfurrow Farm, just south of Whiterun. He is known to be arrogant, self-righteous and patronizing towards everybody, much to the regret of his wife Ahlam and the citizens of Whiterun.

Despite owning Chillfurrow Farm, Nazeem never sets foot outside Whiterun and instead sleeps with his wife at The Drunken Huntsman every night between 8pm and 8am. After waking up he immediately heads to the local market, where he spends four hours inspecting the stalls and insulting the merchants. Starting at noon, he wanders around town until it is time for even more relaxation at the Huntsman between 4pm and his bedtime. On Loredas and Sundas, he was supposed to visit the farm at 12pm, but doesn't due to a bug.

His wealth is undeniable and he sports a set of upper-class attire, including fine clothes and matching boots. He carries the key to the farmhouse, along with a key to Wintersand Manor. He also carries a steel dagger and his pockets are filled with upper-class items and gold.

He speaks in a very condescending manner. As you pass him by, he may briefly mention his political importance.

"Do you get to the Cloud District very often? Oh, what am I saying - of course you don't."

He also claims to be an advisor to the Jarl while speaking in a tone that comes off as patronizing.

"I actually advise the Jarl on political matters. My input is invaluable, of course. But this is all probably a bit over your head."

He also talks about how he earned his status.

"Oh, it took years, but I earned my way to the top. I own Chillfurrow Farm, you see. Very successful business. Obviously."

During his mornings near the market stalls, Nazeem can be seen conversing with the other patrons and merchants. His manner can be condescending at times, and he occasionally makes off-handed remarks about the vendors' products. He can be seen having a short conversation with Ysolda, where he seems proud of his business.

Nazeem: "Ah, Ysolda was it? What brings you to the market?"
Ysolda: "I'm here to buy food, Nazeem. I suppose you don't need to worry about that."
Nazeem: "Owning a farm does have its advantages."

He also speaks to Carlotta, implying that Chillfurrow Farm puts out the best produce and that she should add his products to her lineup.

Nazeem: "These fruits and vegetables are disappointing, Carlotta."
Carlotta: "I get them fresh from the farms daily, Nazeem."
Nazeem: "If you were getting them from my farm, they'd be twice as fresh."

Nazeem: "Do you have anything even remotely fresh?"
Anoriath: "I can assure you, it's all fresh. I hunt the game myself, every day."
Nazeem: "Hmm. As you say."
Anoriath: "Maybe you'd like to try the horker? Or some beef?"
Nazeem: "You don't prepare the meat with any of those strange Elven spices, do you?"
Anoriath: "Ahhhh... No, no Elven spices. Just some salt, to preserve it. You're not afraid of salt, are you?"
Nazeem: "I'm not "afraid" of anything. I simply prefer quality merchandise. No, no this meat won't do at all. Too much fat, and it all smells... wrong."
Anoriath: "Suit yourself, then. The woods are that way. Outside the walls, walk straight ahead. Can't miss them. Good luck on your hunt."
Nazeem: "Good day."

Nazeem's wife Ahlam is quite embarrassed with his behavior, and feels he does not respect her properly.

"If you run into my husband Nazeem, remind him that he's not married to himself."

She also seems resentful of how he touts his connections to the Jarl.

"Looking for my husband Nazeem? Check the Jarl's backside. That's usually where he stuffs himself these days."

During her work hours in the Temple of Kynareth she will often complain about her husband, as seen in this section.