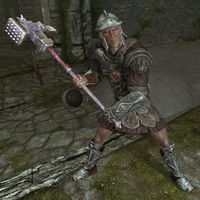 General Falx Carius is an Imperial warrior living in Fort Frostmoth. He carries the enchanted warhammer, Champion's Cudgel, and a Fort Frostmoth key. He wears a set of unique armor, including the cuirass, boots, gauntlets, and helmet, as well as a heartstone necklace (none of which can be looted from his body). Additionally, he will be carrying a Letter to Imperial City if you have not started or progressed his related quest March of the Dead. He can either be accessed by retrieving a key in a knapsack in the deepest room and then unlocking his door, or you can reach him by Whirlwind Sprint from the adjacent tower and entering from the roof of the keep. He will spend all of his time waiting for your arrival in his room.

Carius was posted at the fort around 200 years before the events of Skyrim. When the Red Mountain erupted, he was killed by the debris. As revealed in a journal in the fort, Ildari Sarothril found his corpse and began practicing the black art of necromancy on him, with the intention of utilizing him as a powerful servant for her plot against Neloth. She placed within Carius a heart stone to prevent the effects of the spells from wearing off. It took many weeks of experimentation before Carius showed any sign of response. First he blinked, then he moved, and then he rose. After the initial success of the spells, Carius maintained his free will and attempted to kill her. Out of fear, she removed the heart stone and began further tests, each time faring no better than before. Ildari wanted to gain complete control over him. It can only be assumed that having failed to gain control over General Carius and use him to get revenge on Neloth, Ildari sealed him away inside the fort, as he will be found in a locked room in the fort. Due to Ildari's inability to control him, plus her having no reason to do so, it seems he ordered the attack on Raven Rock himself. He is quite a formidable warrior, especially with his deadly warhammer and the help of his leveled ash spawn minions.

This Skyrim-related article is a stub. You can help by expanding it.
Retrieved from "https://en.uesp.net/w/index.php?title=Skyrim:General_Falx_Carius&oldid=2187172"
Categories:
Hidden categories: