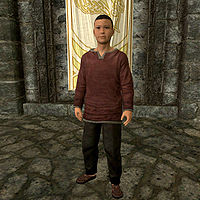 Frothar is a Nord child who lives in Dragonsreach. He is the eldest son of Jarl Balgruuf the Greater, and brother to Dagny and Nelkir.

He, like the Jarl's other children, spends all his time inside Dragonsreach. He wakes up at 6am, and stays in the kid's room in the Jarl's Quarters talking with the other children before heading out to play in the main hall at 9am. He spends his whole day wandering in the hall, taking an hour long lunch at 12pm and a two hour long dinner at 5pm. After dinner, he heads back to the kid's room and waits there till 10pm, when he goes to bed for eight hours of sleep.

Frothar wears red child's clothes and a pair of shoes. He carries a selection of food and toys, and a small amount of gold.

He is quite enthusiastic about the ongoing war and fighting, saying: "Father says I'm too young to train with a sword, so I practice with my fists.", "Hope this war lasts long enough that I get to fight in it. Battle! Glory!" and "You're not from around here. I'll bet you're here to help with the war!". Of the Jarl's three children, Frothar is the only who isn't rude towards you and who won't make any condescending remarks to you.

His sister, Dagny, will sometimes complain to him about a new dress:

Dagny: "I'm so angry, I can hardly stand it! Father promised me a new dress days ago, now where is it?"
Frothar: "It takes a while to make a dress, Dagny. You have to be patient."
Dagny: "But I don't want to be patient! I want my dress right now! Father promised!"
Frothar: "All you ever do is complain about what you want. You're a spoiled baby."
Dagny: "I'm going to tell father you said that. He'll tan your hide for sure!"

If spoken to after the completion of The Fallen but before you begin The World-Eater's Eyrie, Frothar will excitedly ask, "Is it true? Did you really capture a dragon on the Great Porch?"

This Skyrim-related article is a stub. You can help by expanding it.
Retrieved from "https://en.uesp.net/w/index.php?title=Skyrim:Frothar&oldid=2083741"
Categories:
Hidden categories: