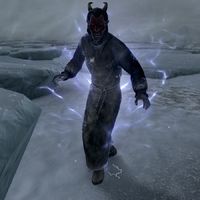 Dremora Lyrkynaz is a Dremora mage whom you must summon during the quest The Arms of Chaos as part of the Arms of Chaos Creation. Once you have obtained the Sovereign Band, you will be directed to use it at a Daedric altar east of Skytemple Ruins in order to summon three Guardians of the Sigil Stones. Activating the altar will summon three Daedra in short succession: Dremora Sehtkynaz, Dremora Lyrkynaz, and Dremora Sovereign. Dremora Lyrkynaz is the second Dremora to appear, and will be summoned as soon as you kill Dremora Sehtkynaz.

Dremora Lyrkynaz utilizes powerful shock magic in combat and can summon a storm atronach. He carries a dagger and warhammer along with a Green Sigil Stone. He will drop a Deadra Heart when killed.

This Skyrim-related article is a stub. You can help by expanding it.
Retrieved from "https://en.uesp.net/w/index.php?title=Skyrim:Dremora_Lyrkynaz&oldid=2096971"
Categories:
Hidden categories: