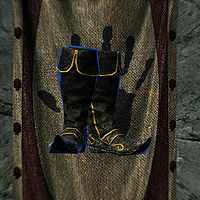 Cicero's Boots are the pair of shoes worn by their eponymous owner, Cicero. These boots are a part of a set that also include Cicero's clothes, gloves, and hat. As Cicero sees himself as a clown, the boots' outward appearance reflect this. The boots are black, with golden detail lines to draw attention to them. The toes are notably pointed making the overall design more distinct. While the boots are physically designed to draw attention, their enchantment has the opposite effect. The shoes have been enchanted to muffle the sound created by movement by half a point, effectively halving how loud any footstep taken in them will be.

Cicero's Boots can be obtained during The Cure for Madness. If Cicero is slain during this quest, his equipment set can be freely retrieved from his corpse. Another version of this item, the more generic Jester's Boots, can easily be acquired during the same quest. While entering the Dawnstar Sanctuary, the full set of Jester's equipment can be found upon a table right after entering the sanctuary. Like the superior set, the Jester's version of this equipment has been enchanted to muffle movement by half a point. However, the Jester's Boots weigh twice as much as Cicero's Boots, and are worth fifty less gold.