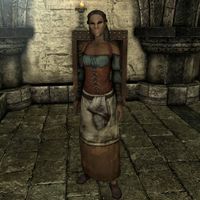 Brelas is a Bosmer pawnbroker met during Elenwen's party at the Thalmor Embassy during Diplomatic Immunity. If you use Erikur as a distraction option, he will attempt to seduce Brelas. Upon her rejection of his advances, he becomes angry and has her sent to the dungeons where Etienne Rarnis is also being held. You will have the option to free her.

If Brelas was not involved in the distraction, she will not be sent to the dungeons, and will thus remain in the entrance hall of the Thalmor Embassy, where the party took place.

This Skyrim-related article is a stub. You can help by expanding it.
Retrieved from "https://en.uesp.net/w/index.php?title=Skyrim:Brelas&oldid=1964718"
Categories:
Hidden categories: