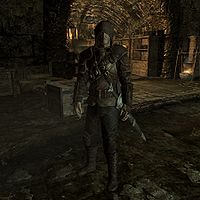 Etienne Rarnis at the Ragged Flagon 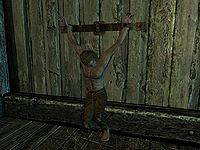 Etienne Rarnis bound in irons, being interrogated at the Thalmor Embassy

Etienne Rarnis, a Breton rogue, is found in the dungeon of the Thalmor Embassy during the quest Diplomatic Immunity, where you are required to infiltrate the embassy to discover what knowledge the Thalmor have regarding the return of the dragons. He is being interrogated when you arrive. Later on, he will relocate to the Ragged Flagon cistern, where his attitude will vary depending on how he was treated - he will be grateful if he was rescued, be angry if you pretended to be a Thalmor interrogator (even if you later on rescued him), and be neutral if you ignored him.

This Skyrim-related article is a stub. You can help by expanding it.
Retrieved from "https://en.uesp.net/w/index.php?title=Skyrim:Etienne_Rarnis&oldid=1304423"
Categories:
Hidden categories: