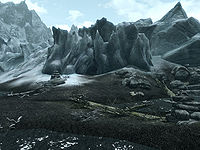 Bleakcoast Cave is a small cave southeast of Winterhold and directly east of the Shrine of Azura occupied by frost trolls.

The exterior of the cave more than explains the name with its dreary landscape and wood debris. An iron ore vein can be found to the north of the entrance, on the shoreline, and a nirnroot grows nearby to the south. Skeletal remains are strewn about the outside of the cave, evidence of a large carnivore inside.

The cave's circular main chamber holds two frost trolls and the grisly remains of the trolls' meals, but nothing of interest. A third frost troll is in the smaller chamber to the west. Here also are the corpses of a novice conjurer and a bandit with a small coin purse on the ground beside the bandit. On the novice's corpse you'll find a copy of the Two-handed skill book Battle of Sancre Tor. Next to him is an apothecary's satchel covered in blood. Another ancillary chamber is to the north. A skeletal torso is suspended, upside down from the ceiling with a random, enchanted greatsword lying underneath . A fourth frost troll is in the chamber ahead along with a dead Khajiit next to a medium coin purse.