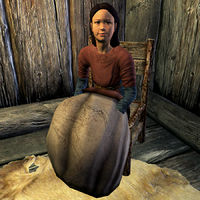 Agni is a Nord child living in Morthal. She was taken in by the resident wizard Falion after the loss of both her parents, and is currently training to be his apprentice. Due to this, she doesn't share the same opinion of him as the rest of the town. She can be seen running around with the other children early in the morning, but mostly stays with Falion in his house during the day.

She gets up at 7am and stays home until 8am, when she goes outside to play. At 1pm, she returns to Falion's house and wanders around the place, sometimes conversing with Falion. Agni heads to bed at 9pm.

She wears child's clothes and a pair of shoes, and is equipped with an iron dagger. She carries a key to Falion's house, a selection of food and toys, and a small amount of gold.

When she is spoken to she can potentially say:

"Do you like magic? Falion says I'm good at learning. I like learning about magic."
"My mother and father died years ago. Falion takes care of me now."
"I asked Falion if someday I could learn from the mages in Winterhold, but he doesn't like that idea."

Agni may be seen having some random conversations with Falion in his house, as outlined below:

Agni: "When I grow up, will I go to the College in Winterhold?"
Falion: "No, I don't think that will be necessary."
Agni: "But I'm learning about magic, and that's what they do there. Shouldn't I go?"
Falion: "The College is not the only place to learn about magic."
Agni: "But you went there, didn't you? Isn't that where you learned?"
Falion: "I was there only for a short time. Much of what I have learned has been on my own. And I will teach you. You have no reason to go there."
Agni: "But..."
Falion: "That is enough."

Falion: "Have you been working on your concentration?"
Agni: "Yes sir, I have."
Falion: "Good. Concentration is paramount when dealing with magical forces."
Agni: "Why?"
Falion: "Because an unfocused mind will almost certainly be obliterated. Destroyed by the forces you attempt to control and yield."
Agni: "Oh."
Falion: "Have no fear. I believe it is within you to excel in your studies. But you must learn to concentrate!"
Agni: "Yes, sir."

Agni: "Is it true that you kill deer and eat their hearts?"
Falion: "What? Where did you hear such a thing?"
Agni: "I don't know. Someone in town said it."
Falion: "It's not true, I assure you."
Agni: "Okay."
Falion: "Don't believe everything you hear, child."