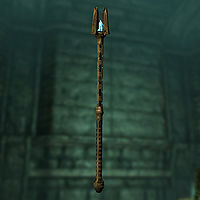 The Aetherial Staff is a staff created at the Aetherium Forge as one of three possible rewards for Lost to the Ages. The appearance of the staff is similar to the Spider Control Rod, but with an aqua-blue crystal made of Aetherium.

The Aetherial Staff can summon Dwarven Spiders or Spheres, although there is a chance there will be a mishap in the summoning with interesting effects. The specific chances associated with each outcome and the specific details of those outcomes are captured in the tables below.

When a mishap occurs, the mishap can be any of three outcomes according to the following table: