The following are general glitches which have been reported by UESP members. Their inclusion in this list does not necessarily guarantee that said bugs will appear in your game.

On occasion, pressing both the attack and defend buttons simultaneously will cause the auto-defend action to no longer work. The functionality of this action may be restored by restarting the game.

An unknown cause may lead to Cyrus spasming while on the Beetle Bug, leading to a frozen state upon reaching the pipe level. This can be circumvented by returning to the starting area of the ruins and toggling collision off to walk through to the other side. Entering and exiting the Beetle tunnel appears to work normally after this.

Proximity limits make it possible to be attacked by guards when conversing with citizens and to receive a "They aren't armed" message when attempting to retaliate in the vicinity of a non-aggressive NPC.

An unconfirmed source states that, as noted on the official Redguard forum, the above-noted "bugs" were intentionally placed within the game by the developers. 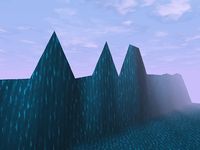 If you can avoid the sharks and tentacles, it is possible to swim as far as you like from Stros M'Kai. After a while, you will come across a raised wall of water, usually with a jagged top. Surprisingly, some parts of this wall can be crossed simply by walking over them. The collision pushes Cyrus to the very top almost immediately and then back down. After this first wall, the camera starts to fall behind as you move farther away.

No matter which direction you choose, you will eventually reach another instance of the map, but with all objects missing. The cycle of blank maps followed by walls of water continues on, presumably until some memory limit is reached. Before this, however, the camera will be too far away for you to see Cyrus at all.

This glitch is likely referenced in 36 Lessons of Vivec, Sermon 17, which says of Vivec and Nerevar: "They walked farther and saw the spiked waters at the edge of the map."

The "X" marking N'Gasta's location has been noted to be situated roughly 10-20 pixels higher than it should be. Whether this is the result of a bug or a developer's oversight is unknown.

If, while backing up in an attempt to acquire an item, an object blocks Cyrus' path, the game will glitch (displaying a constantly backing up Cyrus) or freeze. This error may be circumvented by reloading a prior savegame.

Like Picking up Items bug but this one happens when you try to speak with an NPC.

Falling into water and being attacked by a shark may lead to a total system freeze. In this state the game will be utterly unresponsive. The only means of correcting this error is by a total reset.

If Cyrus has a consumable item in his inventory, such as a bottle of water, before being turned into a gremlin by Jaganvir, and then presses the use key, this will cause Cyrus to "consume" the item and freeze in place. Avoid using the use key except to talk to NPC's until Cyrus is changed back.

The infamous void continues to plague Elder Scrolls titles. Entering the void will lead to the player plummeting through empty black space, eventually leading to death and a "Reload Last Save Game" message.

Thus far, players have reported entering the void from the Goblin Caverns (while bouncing on a mushroom) and the town docks (while walking up the stairs from the first floor).

Saban under the entrance to the Goblin Caverns

Getting Saban Back To Camp

After completing the Save Hayle's Soul quest Saban may walk off towards southeast away from the Yokudan Camp, this will cause problems if you complete this quest early, especially with the last quest, Raze the Palace. The glitch is if she walked too far off from the camp and the player talks to her and when the screen needs to go to Coyle to translate what his mother says the screen will lock on him and the conversation won't continue. Part of this walking glitch that Saban will walk down to the river shoreline underneath the entrance to the Goblin Caverns. One way to fix this of her getting back to Coyle, is get Cyrus near her then step away and this sometimes change her walking direction.

You may find at certain points in the game that a location will freeze loading at 95%.

A fix for this involves having an earlier save where the location will load properly, this can be tested by manually going to the location or using console commands.

Once you have located a working save, find it inside of the Redguard SAVEGAME folder and copy the .TSG file with the name of the location into the problematic save file.