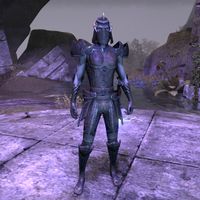 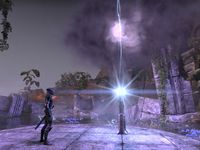 Valaran with the conduit stone and sudden storm

Valaran Stormcaller is a Maormer found at Tempest Island, of which he is a boss. He has a chance to drop Stormcaller's Blade. A "Sudden Storm" summoned near him will move around the room, electrocuting those who touch it, and should be avoided.

Crushing Blow
Can be blocked. If not blocked, he will knock you back.
Shock
Caused by the Sudden Storm
Slash
Basic physical attack.
Summon Lightning Avatar
Valaran Stormcaller summons a Lightning Avatar.
Enervating Bolt
Stuns you if you don't avoid it. Deals lightning damage.

When entering combat, he will be shocked by the conduit stone and knocked back, saying:

"The storms are powerful, now! You'll die before I let you touch the Conduit Stone!"

"It's too late to stop the storm, now. Your death will be the first of many."