Online:The Fate of the Frozen

The UESPWiki – Your source for The Elder Scrolls since 1995
< Elder Scrolls Online: Quests: Western Skyrim / Side Quests
Jump to: navigation, search

I found a wounded, former Frostbite Raider named Magreta who asked me to reunite her with her partner, Nelfthea, who is still with their raiding band on the Frozen Coast.

On the other side of the Coast[edit]

On the frigid coasts of northern Western Skyrim, you come across a Nord raider, Magreta, cursing at unseen enemies. She tells you she escaped a "bunch of wretched bastards" known as the Frostbite Raiders, yet her partner, Nelfthea, failed to run away and might now be in trouble.

You agree to help find Nelthea and take the boat to the Frostbite's hideaway on the Frozen Coast.

You arrive to the hideaway to find it teeming with raiders along with their bear and wolf companions, as well as a handful of half-giants. As you advance north you find crumbled, burning buildings. It is now time to search for clues of Nelfthea's whereabouts. 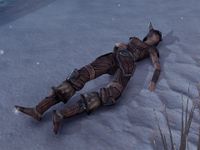 Among the evidence found is a note left by Nelfthea to Magreta explaining her intentions to stay with the Frostbite for one more raid before deserting, as they are starving and supplies are low. You will also find the corpse of Captain Hasgenr of the Raiders, alongside another note left by Nelfthea warning him that a ship is heading towards their hideout with intent of ambushing them, and she's gone to try and hold them off.

Our third clue is a wounded raider, Feluf, who is thankful you are not one of their half-giant assailants and warns you to run before you wind up like him. He also tells you that he is uncertain whether Nelfthea lives or not, and last he saw of her was when she was hit off the docks by a giant. Feluf says Nelfthea fell northeast, where the ambush landed, so that is where you go to next.

Nearby the imposing giant, Chief Gruthar, you will come across a snow mound. Digging through it you find a corpse which is apparently Nelfthea's, from which you pluck her necklace as proof of her valiant death.

You return to Magreta by boat and show her the necklace, which she recognizes as Nelfthea's. She regrets her death in helping someone that didn't deserve her, and thanks you for letting her know by bringing her the necklace.

This Elder Scrolls Online-related article is a stub. You can help by expanding it.
Retrieved from "https://en.uesp.net/w/index.php?title=Online:The_Fate_of_the_Frozen&oldid=2247316"
Categories:
Hidden categories: