The Frozen Coast is the northeastern shoreline of Western Skyrim. As the name implies, the landing is frozen all year round as the snow and ice never melts there. In Elder Scrolls Online, it is also the name of the Delve in the area. It is an island off the coast that is surrounded by ice floes and has a few wooden shacks and tents. It is home to the Frostbite Raiders, but recently others have come to the island and neither groups are friendly to you. While on the island, the water is so cold that standing or swimming in it for long will freeze you to death.

One of the Frostbite Raiders will send you to the island to reunite her with her partner. 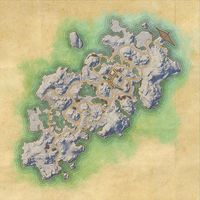 A map of the Frozen Coast

This Elder Scrolls Online-related article is a stub. You can help by expanding it.
Retrieved from "https://en.uesp.net/w/index.php?title=Online:Frozen_Coast&oldid=2420760"
Categories:
Hidden categories: