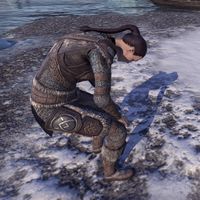 Magreta is a Nord who can be found next to the boat to the Frozen Coast.

As you approach the exhausted and injured woman, she will let loose a string of curses:

"Orkey take you no good, hork-arsed bastards! Straight to Oblivion!"

If you talk to her she will be belligerent but will tell you her story if you persist.

"What are you staring at? Never seen a Nord hurl curses at a bunch of wretched bastards?"
Who are you yelling at? I don't see anyone else here.
"Yeah, well, they're long gone—across the water—and my Nelfthea with them. She should have just run off with me. We'd have scraped by without more of their dirty money.
Don't know why she's so loyal. After all they've made us do."
Who is she with?
"The Frostbite Raiders. Bastards. Every one. Except, Nelfthea. We've had enough of the bloodshed. She promised to come with me once she's gotten her share from our last raid, but … I hear fighting on the Frozen Coast. She's in trouble. I know it."
I'll help Nelfthea. Where can I find her?
"You can take that boat to the Frostbite's hideaway on the Frozen Coast. It's a ramshackle dump. Shacks and tents on shifting ice floes. There's no telling where Nelfthea will be. You'll have to search. Don't spare any raiders who get in your way."

You can ask her some questions before you leave.

What happened to you?

"Damned Frostbite found out I was planning to leave them, so they decided to beat me senseless and toss me out to sea on that boat with nothing but the clothes on my back. I don't know if I'm glad they didn't suspect Nelfthea too or not."
Why would you want her to get beaten and exiled as well?
"At least we'd be together. Away from whatever mayhem is unfolding in that raider camp. I'd suffer dozens more lumps if it meant we could lean on each other and limp our way to a better life."

How will I know Nelfthea when I see her?

"She's pretty, fair-haired and fierce, but she's got kind eyes when you know her. She wears a protective charm passed down from her grandmother around her neck. Old Nord magic. Nothing else like it among the raiders."

Anything else you can tell me about the Frozen Coast?

"The name says it all. It's a treacherous landing where the shallows and shore stay frozen year round. We only use it as place to gather between raids.
Careful on the ice. It's not firm enough to trust and those waters are deadly cold."

While you search the Frozen Coast for Nelfthea you will find the raiders are under attack by a force of Half-Giants lead by a Sea Giant. Nelfthea fell while defending the place and you can bring her necklace back to Magreta.

"Where is she? Where's my Nelfthea?"
Was this her necklace?
"No, Nel … why'd you choose them? What'd they ever do to deserve you?
Thank you for bringing me this. For letting me know. It's worth what little the Frostbite left me."

Once you have brought her the sad news, you can explain what happened.

"Do you know what happened to my Nel? Did those rotten Frostbite bastards turn on her, too?"
No, she died fighting off invading Giants that attacked the coast.
"Giants? My Nel? She was always last to draw steel on a raid. Why would she do something as suicidal as fight Giants?"
She cared about what would happen to the Frostbite if she left.
"Never a soul she didn't care about. Even on a raid, when the rest of the Frostbite were making off with everything they could carry, she'd leave what she could behind for those we'd robbed. This isn't how she was meant to live, let alone die."
What were your plans?
"She liked horses. Not that she'd ever ridden one. She was going to work a stable. Learn the trade. I hadn't figured out what more I wanted than to be with her. Now I don't even have that.
Nelfthea was too good for this. Too good for me."