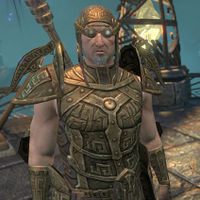 Thaddeus Cosma is an Imperial time traveler outfitted in full Dwemer armor. You will meet him in the ruins of Nchuthnkarst in Blackreach: Greymoor Caverns.

Thaddeus is intentionally mysterious about his origins and purpose. For instance, he starts to tell you what organization he belongs to before stopping himself. He seems to have a great deal of knowledge of both the Dwemer and time travel, although it's unclear if those two subjects are related or coincidental. He could be from any place, or any time.

Thaddeus will first be encountered on a balcony within the ruins of Nchuthnkarst.

"You! Of course it's you. It simply couldn't have been anyone else, could it?"
Do I know you?
"That depends. What year is it? No, wait! Don't say it, there's already enough temporal instability going on in this place.
My name is Thaddeus Cosma and I am a member of … you know what? That's not important right now. This device, however, is!"
What exactly is that device?
"Too complicated to explain. See that scroll on that ledge there? It's a list of components I need you and your friends to track down.
Unless I fix this device, the temporal and spatial distortions will tear this place apart, along with all of us."
Right, I'll see what I can do.
"The list. On the ledge. Take it. It's important, I swear.
Unless it's time shifted again. I say, keeping anything on your person through these trips is a hassle."

After reading Thaddeus's List of Parts, Kireth and Raynor will join you:

"If you want to save your companions, find those components I listed!
But be careful. The distortions are bringing all kinds of strange creatures from across Tamriel and beyond to this very spot! Be prepared for anything. And I mean anything."
Where did Kireth and Raynor go?
"Where indeed! I suppose they could really be anywhere. The Merethic Era, the distant future, the very start of creation!
Don't get hung up on it. Rather, we should concentrate on how to bring them back … providing they haven't already perished."
How do we do that?
"Fixing this Dwemer device should realign time and return every thing and every one to its proper place. In theory.
Which is why I need those components. In light of unfortunate circumstances, the responsibility to retrieve them now falls to you."
How will we find them?
"More questions! I almost forgot what a curious creature you are.
All I can say for sure is you will know them when you see them. Now hurry along! I'll stay here and keep the device stable for as long as I can."

After you return with the requested parts:

"Hah! There you are. Did you find the parts we need? Time is of the essence!"
I have the parts. I saw some strange things ….
"Of that I have no doubt.
Now, I need to ensure the central resonator remains stable during the process. You must install the components. There, there, and there. Quickly now!"

Speaking with him again before repairing anything:

"You need to repair the machine! Need I reiterate that time is something we do not have? Hurry!" 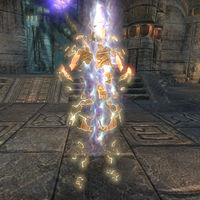 He will then help you repair the Dwarven device.

Speaking to him before pulling the lever:

"What are you talking to me for? Do you want to save your companions or not?
Go throw the switch on the overlook! Move it, move it!"

With the repair completed, he will instruct you to pull the nearby lever to end the temporal disturbances.

With this done, he will say:

"Brilliant! You did it!
I'm incredibly grateful. You can't possibly imagine how uncomfortable it is to be in the wrong temporal configuration. Imagine bowel cramps, except all throughout your body. Absolutely horrid."
Where are Kireth and Raynor?
"It will be a few moments before everything reconfigures itself. They should realign to your time as I depart for my own.
So, if you have any questions, now would be the time!"
You said you were from an organization?
"Ah, yes. We're the ones who ask questions. You provide the answers, usually in the most destructive manner possible.
I'm afraid I can't be more specific. The fragility of your brain and your understanding of space and time are rattled enough as is."
Are you from the future?