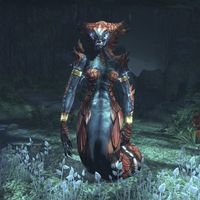 Sellistrix the Lamia Queen is the leader of the lamias invading Arx Corinium. She is the final boss players must defeat to complete the dungeon. During the battle, the Sisters of Floods, Rain, and Waves will be available to assist you.

Her unique drops are the Fang of the Lamia Queen and Sellistrix's Siphon, both items in the Medusa item set. It is also the namesake of the Sellistrix set, style, and the basis of a trophy and bust.

As a boss type creature, Sellistrix is immune to all forms of crowd control abilities.

Clawed Swipe
A basic melee attack that does high physical damage. If taunted, the boss will be forced to use this attack on the tank only.

Piercing Shriek
The boss screams, doing high physical damage over time and staggering all players in front of her as indicated by a red cone. Avoid standing in front of her unless you are the tank.

Lightning Bulwark
The boss arena consists of islands (illuminated by light) and the water in between. If she stands in the water she will electrify it, causing the water to do moderate shock damage over time to all players standing in it. The tank should try to hold the boss on one of the islands to avoid this. Do note that when she is in the water, her damage shield is removed.

When the boss is on dry land, she will gain a damage shield that reduces incoming damage. The party may want to position her in the water while themselves standing on dry land to counter this mechanic.

Bolt Discharge
The boss summons a storm, causing debris to fall from the ceiling over the islands, doing moderate physical damage over time as indicated by red circles. To avoid this, stand in the water while she is performing this attack. Note that if she is standing in the water, Lightning Bulwark will activate as well, meaning that both the water and the islands will now be unsafe.

New Target
The boss ignores taunt and runs off to attack a random player for a few seconds. Again, to minimize the movement of the boss, the group should stay close behind her, while the healer heals any damage she may cause.

This Online-related article is a stub. You can help by expanding it.
Retrieved from "https://en.uesp.net/w/index.php?title=Online:Sellistrix_the_Lamia_Queen&oldid=1952439"
Categories:
Hidden categories: