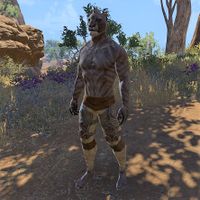 Sarazi is a Khajiit found in Predator Mesa. He fancies himself the "strongest, swiftest, and sleekest Khajiiti hunter in Northern Elsweyr!" He has a challenge for you, if you accept.

When you first approach him outside the mesa, he can be found in various places near the camp and the mesa, doing his push-ups and psyching himself up. "Time to hunt the hunters, Sarazi. Weak quarry, no glory!"

Talk to him to see what Sarazi is doing, he won't appreciate the interruption.

"You have something to say, dull claws? Let's make it quick. You don't get muscles like these by standing around, chewing the fat with outsiders!"
What is this place?
"What? Did you just wander up here like a lost mountain goat? This is Predator Mesa! The hunter's highland! Really? Nothing? Ziss'vo.
Hunters come here to test their claws against savage beasts—a trial of strength and cunning. But mostly strength."
I'm pretty strong.
"Ha! Compared to vigorous Sarazi, you are a dry twig!
This calls for a contest! Hunting beasts is one thing. Hunting hunters, though? That is a real test. Three savage Khajiit hunt any person who enters the Mesa. Whoever kills them all first wins!"
You're on. I'll kill all the master hunters on Predator Mesa.
"Sarazi will give you a head start. This is sporting, yes?
You'll see three prowling Khajiit on the Mesa, unless they see you first. Ha! There's a nesting gryphon up there, also. Quillmane. If you really want to impress me, kill him, too!"

You can then ask him for more information about the hunters, the Mesa and himself.

Tell me about these hunters I'm hunting.
"Having second thoughts already? Ha! It's not too late to slink away. In the face of these muscles and good looks, no one would blame you."

I just want more information, Sarazi.
"Bah! That's the problem with you outsiders. No sense of humor! I joke! Except the part about the muscles and good looks. That part is solemn truth.
Three hunters camp on the Mesa: Zahalar, Kuzo, and Tahuda. Killers, all."

You said they kill people as well as beasts?
"Yes indeed. Beasts. People. It's all the same on Predator Mesa. Anything with a pulse is fair game.
These three live on the Mesa year round—hunting animals and each other. Now, we hunt them all!"

Who are you, anyway?
"Who am I? I'm Sarazi! Strongest, swiftest, and sleekest Khajiiti hunter in Northern Elsweyr!"

I've never heard of you.
"Hmph. Sarazi is still cementing his reputation. Give it time!"

Can you tell me more about Predator Mesa?
"I will tell you what my uncle told me.
Long ago, a tribe of hunters settled here on the Mesa and built a great temple to the Hungry Cat, Hircine. But their love of chasing and bloodshed drove them to hunt each other to death."

What happened next?
"Savage beasts started migrating here, settling around the temple. Eventually, the temple fell apart, and the wilderness took the whole mesa back.
Something about this place brings out the hunter in every Khajiit. Like sugar on raw meat, yes?"

After you have completed the list, Sarazi will be waiting for you inside the Predator Mesa, just near the entrance.

"Ha! Come to your senses, eh? Don't worry, Sarazi won't tell anyone that you ran away. Predator Mesa is not for everyone. Now, watch a true hunter take—
Wait. Is that blood on your hands? Where did all this blood come from?"
I killed the three hunters and the gryphon.
"Kra! I never should have given you that head start! Now what will Sarazi hunt? Birds and chipmunks?
Well, a wager is a wager, yes? Here. Spend it on some decent food, walker. Bulging muscles and a shiny coat start at the dinner table! Farewell."

If you talk to him again, he will focus back on his best traits.

"Sarazi must get back to training. You may have beaten me in our hunting competition, but no one will match my raw physique!"