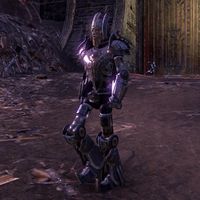 A Ruined Factotum before getting charged

Ruined Factotums are Factotums encountered in the fight with the Reducer, Reclaimer‎, and Reactor‎ in the Reprocessing Yard of the Halls of Fabrication. Initially they do not attack, and will be seen walking up to the Reclaimer. Once they reach him, they will be activated as Reclaimer's Ruined Factotums with an electric charge and run towards players, blowing themselves up to inflict damage. Later on in the fight, they will pop up from the ground in groups already charged and instantly combust.

They also appear in Nchuthnkarst as part of its group event, where they will be summoned once the Clockwork Criterion reaches 25% health.

The factotum blows itself up after being charged up, killing itself while inflicting a medium amount of damage on its target(s)